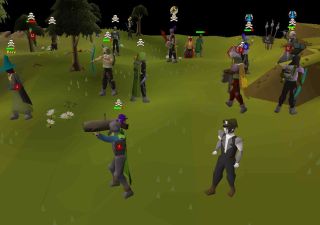 I’m doing sit-ups for a demonic drill instructor who wants to get me in tip-top shape so I can join his military corps. A long time ago, this was one of several random events concocted as a way to deal with the multitude of bots that set up shop in Old School RuneScape, back when it was just plain RuneScape. They stopped being effective after a couple of months. 14 years after they ceased being useful, they persist.

“We kept them because the players quite liked them,” says Mark Ogilvie, RuneScape design director. “They’re part of the fabric of the universe.”

It’s a familiar story in a game that exists because players voted for its resurrection. Old School RuneScape was originally created to be a copy of the game as it was in 2007—an exact replica designed to entice nostalgic adventurers. It’s not a snapshot of the universe as it was, however, as it’s still a living game with updates, additional quests and even a new continent appearing. It’s in a uniquely strange position, growing alongside its successor, RuneScape 3.

The fundamentals, though, remain the same.

“I always call it the ‘RuneScape comfort blanket’,” Ogilvie says. “These players, when they log into the game, it’s muscle memory. Everything is where they expect it to be, and the game plays the way they remember. That’s one of the main differences between Old School and RuneScape 3. While all that nostalgia is still there in the new RuneScape, it’s hidden behind this veil of updates. This feels like a different game.”

Back to the start

When you leave the tutorial island, with its basic lessons on how to move, fight and level up your skills, you’re dropped in Lumbridge, outside a castle, and you just pick a direction. You might remember that there are rats in the kitchen cellar (of course there are), along with a quest from the Duke’s chef that will send you all over the surrounding area to find ingredients for a cake.

These early quests go all the way back to 2001, when the very first iteration of RuneScape was born. Generally, Jagex creates content aimed at the average player level, so most of the low level quests were already considered old in 2007. They’re also the most completed quests in the game, being the first things new players come across, so it’s even more important that they match players’ memories of them.

As I run around, hunting down flour and eggs, Ogilvie points out some goblins lurking behind a fence, menacing farmers. The little ne’er-do-wells are having a bit of trouble getting past the obstacle. They don’t look happy about it, but from where I’m standing, they can’t get near me.

“This is where quite a lot of players start their early ranging career, by sitting behind one of these little fences and shooting the goblins with their bow and arrow,” he explains. “The route-finding has always been quite odd in RuneScape, but when we try to change it the players always beg us not to, so we haven’t.”

Maintaining the nostalgia often means leaving exploits and quirks and regrettable design choices alone, even if fixing them can easily be done. Even the menus have to be made out of existing sprites, while extra NPCs and buildings are often made from decade-old, and often older, assets.

“It’s always interesting for me, as a designer,” Ogilvie says. “I might look at something and think I can improve it—improving its functionality, getting an artist to work on it, adopt loads of modern UI design principles—but that’s not what the players want.”

When it’s not the players ensuring that much of Old School RuneScape remains the same, it’s the tech. RuneScape was the kind of game you could play on a rubbish school computer between classes, on a browser. There was no worrying about if you could run it or not, or if you’d come back the next day to find it uninstalled.

“One of the tech problems we’ve got operating this old game is that it was written in this form in 2003 to run in the browser on low-spec computers,” explains Ash Bridges, Old School RuneScape’s principle content developer. “It means it cuts a lot of corners. One of them is render orders, another is that it can’t use multiple cores because in 2004 you probably didn’t have one. It can’t use the GPU either. This means we can’t use the full capacity of your computer. It’s fairly processor-intensive, for the one processor it uses, so it’s rather hard for us to upgrade the intensity, like increasing the draw distance.”

With two developers sitting either side of me, I’m not lacking guidance, but for everyone else Old School RuneScape eschews the kind of clear path through the game that modern MMOs typically favour. The mini-map reveals the location of quest-givers, while a journal collects important quest information, but nothing is spelled out.

There are puzzles, mysteries and traps, evoking CRPGs and adventure games more than MMOs. It’s impossible to get stuck thanks to the decades of wikis and walkthroughs, but it can be a welcome reprieve from hours of grinding skills when you have to engage your brain. Rather than there being one big ol’ main quest, there are hundreds of vignettes and self-contained stories, and rarely do they devolve into straightforward fetch or kill quests. They might use their structure, but then they subvert or put a RuneScape twist on them.

Quests are full of branching and optional dialogue choices, and it’s dialogue worth reading. That might be the most pleasant surprise about returning to the RuneScape of my teens and twenties: I wasn’t wrong, it really was very funny. It’s wry, with a penchant for parody, and it usually rewards chatty players will cracking punchlines and fourth-wall-breaking gags. It’s never been a game that takes itself very seriously.

As we head to Varrock, a city famed for its large central street that players use to efficiently and quickly build up their fire making skill by making long rows of them, I spot a player wearing the fanciest of rainbow boots. They’re a reward, it turns out, for completing the Stronghold of Security, a very RuneScape way of handling account security. Essentially, it’s a dungeon that teaches you to not give out your password, and use better security. You answer questions given to you by magic doors until you get to the reward area, netting you a lovely pair of shoes.

“Will Jagex block me from saying my password in-game?” one door asks, referencing an old scam where players would tell other players this obvious lie, inspiring them to type it into chat, letting everyone see it. Embarrassingly, a member of Jagex once fell for it.

“He was in the office and went on his personal account,” recalls Bridges. “Stood in the middle of Varrock, he came across someone saying ‘Jagex blocks your password’. So he tried it, and a few minutes later he found he couldn’t log in anymore.”

The tongue-in-cheek, sometimes wacky tone doesn’t mean everything can fit with RuneScape. It might have a holy grail quest involving King Arthur and pals—who talk about leaving England and taking a holiday in RuneScape—but Jagex also tries to ground its characters and flesh them out, rather than just using them for jokes and quests. Take Varrock’s star-crossed lovers—a pair of Shakespearean stand-ins—and their squabbling families. Their quest is a Romeo and Juliet parody, but these characters still have roots and backstories, while references to their history can be found elsewhere. They exist outside of their quests.

Any new additions, then, have to take into account all that history, as well as the expectations of the players. “When we add new areas, they have to be, broadly speaking, consistent with what players already know from the other RuneScape,” Bridges says. “A good example is when we added the snake boss Zulrah in the depths of the poison swamp. This area already existed in RuneScape 3, but when Old School came out, the world cut off abruptly because we hadn’t done any more map. In RuneScape 3, the swamp had nothing there, so when we added it, we also made village made out of old assets, a cult, Zulrah and his high priest.”

There’s a religion, ritual sacrifices, a host of NPCs and a tricky solo boss battle. While none of this was around in 2007, because players know the land itself exists in RuneScape 3, it only makes sense that there’d be a swamp there in the past, in Old School. There are other nods that connect the eras, too. Chatting with the gnomes who live in the snake’s swamp, you’ll hear rumours about a gnome city, but you won’t be able to visit it. In RuneScape 3, that city is Arposandra, and it’s actually responsible for the swamp’s noxious fumes.

None of this is to say that Jagex will never add an area told Old School unless it’s already in RuneScape 3. In 2016, the studio opened the doors to a brand-spanking-new continent: Zeah, significantly expanding the map.

“The players want to see areas have their stories developed, so we introduced a new continent,” Bridges explains. “They want to know why this place is as it is, and they want to learn its history, so that’s our ongoing story. There are five houses fighting over a city, Great Kourend, and we’ve released quests—smallish ones—for low level players, covering three of the houses. Two more are still to come. Once you’ve done all of them and learned the history of each house, you’ll be able to move forward and find out what they’re going to do next. The houses are fighting to make sure their guy gets to be the next monarch, but we’re doing this gradually.”

Bridges and Ogilvie acknowledge, however, that most of the players who care about new stories get their fix with RuneScape 3, where the majority of new narrative content gets added. Watching the history of the world develop over time is a bonus, but a lot of what the team does is add more PvE challenges and skill updates. That doesn’t mean players are nudged in any specific directions, though. Old School RuneScape is a freewheeling sandbox, giving it a broad appeal that persists despite its age.

“If someone wants to just log into the game and fight monsters and level up skills, they can,” Ogilvie says. “If they want to jump in and do quests, they can spend hours just doing quests, and not do any skills at all. It’s all entirely optional. There’s a whole bunch of mini-games to play, or you can get stuck into PvP straight away.”

He remembers one player, in RuneScape’s early days, who did nothing but chop down trees. “This player had a massive woodcutting level, but absolutely no stats in anything else.” They didn’t even use the wood, dropping it on the ground instead. For them, it was something to do while they chatted to their friends. RuneScape was this player’s IM of choice in the early 2000s.

They’d been playing for nine months.