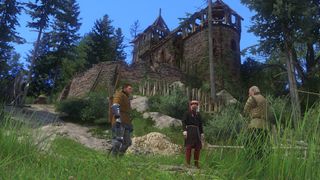 THQ Nordic has today acquired Warhorse Studios, the developers behind Kingdom Come: Deliverance. As well as the studio, the acquisition also includes 'all intellectual property rights.' The studio will be a subsidiary of Metro Exodus publisher Koch Media.

The news comes exactly one year after the release of the medieval open-world RPG, Kingdom Come: Deliverance and has now sold over 2 million copies across all platforms.

The game started off with a hugely successful Kickstarter campaign back in 2014, and while there were a number of bugs and glitches to iron out at launch, the overall realism and attention to detail did prompt a positive reception. You can read what Andy made of it in our review here.

Of course, THQ Nordic is no stranger to acquisitions; just last month they obtained the rights to the action-adventure game Outcast and last year saw them grab Carmageddon as well as a number of other games and studios.

Here's what says Lars Wingefors, CEO of THQ Nordic AB, had to say about all of this. "Warhorse Studios is one of the leading independent studios in Europe and I am proud to welcome them to the THQ Nordic group. Kingdom Come: Deliverance, which has now sold over 2 million copies, has been a great success since the release exactly one year ago. I look forward to continuing to witness the owners run the studio and drive the creative process for many years."

We'd love to see what else is on THQ Nordic's shopping list.