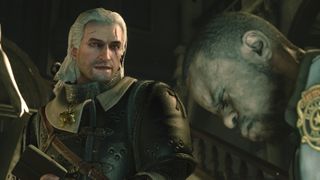 It's appropriate that Geralt arrives in the world of Resident Evil 2 Remake a whole five days after Ciri was added as a playable character. After all, he spends most of The Witcher 3: Wild Hunt chasing after her, though not particularly diligently if your Geralt gets distracted by sidequests as much as mine does.

This is the second Witcher-based mod for Resident Evil 2 remake by Wiwilz. The first replaced Claire with Ciri, and this one replaces Leon with Geralt—which is definitely an upgrade for the Raccoon City Police Department.

Unfortunately, while Geralt's silver and steel swords are present on his back, you can't use them to slice through the hordes of zombies. Still, the White Wolf isn't known for using guns to take down monsters, so for a proper Geralt experience I wager you try a knife-only run. It's a challenge but so is the life of a witcher.

As with the Ciri mod, you'll need fluffyquack's mod manager to install this one. Unlike the Ciri mod, however, this one also has facial animations. The modder notes that they're working on adding animations to Ciri but there are no promises it will be done.

If you want to play Resident Evil 2 remake as someone else then you can always try out the 2B from Nier: Automata mod, or the Barry Burton mod.