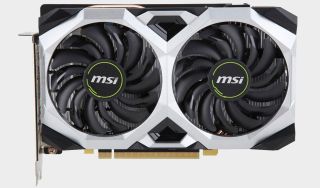 If you're always fiddling with game settings to get playable framerates, it's a sign you're ready for a new GPU. Fortunately, this is a good time of the year to be in the market for one. For example, Newegg is selling MSI's factory overclocked GeForce GTX 1660 Ventus XS OC model for $189.99 after a couple of discounts.

The first is a $10 promo code—just enter VGASAV929 at checkout to trim $10 offer the asking price. There's also a $10 mail-in-rebate available, so when you factor in both the promo code and rebate, you're saving a tidy sum.

These kinds of deals are made possible in part because of Nvidia's Super refresh. The GeForce GTX 1660 Super occupies our list of the best graphics card for mainstream gaming, but you'll also pay more for one of those—there are couple of options on Newegg for $229.99, and several more for $249.99.

The regular GTX 1660 is still a very good card for 1080p gameplay. At that resolution with the settings on medium, Jarred found the GTX 1660 to be around 12 percent faster than a GTX 1060 6GB, and 20 percent faster than the 3GB model. And for the most part, it can handle ultra settings at 1080p (save for a few games where it doesn't average 60 fps).

If you'd rather not fuss with a mail-in-rebate and are okay with a single-fan cooling solution, you can grab EVGA's GeForce GTX 1660 Black Gaming card for the same price. It's listed at $209.99 on Newegg, but applying coupon code VGAPCP592 knocks $20 off the price.