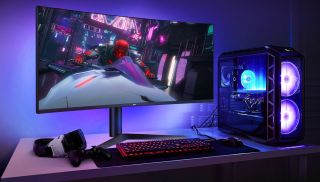 In hindsight, I understand why soothsayers were declaring PC gaming dead at the end of 2009. To the outsider, we were an insular group of World of Warcraft and Counter-Strike fans who still clung to genres carved out in the '80s and '90s—but didn't we know that Sierra Online was defunct, Cliff Bleszinski was making Xbox 360 games now, and id Software was an iOS developer? PC gaming didn't seem as cutting edge in the age of Xbox Live, the ubiquitous Wii, and blockbuster console series like Gears, Forza, Halo, Killzone, and Metal Gear.

Of course, the soothsayers were wrong. Over the past decade, Steam's concurrent user count shot up from a little over 2 million to over 14 million at its peaks. And even as Valve's service expanded—transforming from a hand-picked boutique into a labyrinthine marketplace—it couldn't contain PC gaming alone. On and off Steam, a new free-to-play ecosystem grew around MOBAs, MMOs, and shooters, and a flood of roguelikes, visual novels, Kickstarted RPGs, grand strategy games, sex games, VR games, and more spilled out of modders and do-it-yourself PC developers who didn't need anyone's permission to make games—no console dev kits, no licensing agreements.

Minecraft and DayZ alone spawned dozens of offshoots that mix survival and building and social dynamics in ways that had never been done before, and along with new esports contributed heavily to the rise of livestreaming. Competitive and co-op games flourished—with some help from Discord, which made voice chat gatherings more accessible—and at the same time, the death of the singleplayer game was exaggerated again and again.

Old PC genres were renewed, and new genres spawned from the creative interplay between big and small developers, modders, crowdfunders, and players. The past we appeared stuck in led us into the future, whereas the Hollywood movie wannabes that gaming celebrated 10 years ago—the Uncharted series comes to mind—are what feel old today. The decade was all about turn-based tactics games, after all.

Putting aside some of last year's squabbles—Epic Games Store exclusives being the most prominent—PC gaming feels delightfully positive right now. Here in 2020, more games release every week than anyone can keep up with, and the PC is not an afterthought like it was for a part of the new millennium. Good PC versions of Japanese console games are becoming the norm, indie games generally target the PC first, and Microsoft has committed itself to treating Windows 10 as an extension of its Xbox business. Games for Windows Live is becoming a distant, dark memory.

And so much of what's available is cheap, free, or free-to-play. While microtransaction-funded games got a bad rap initially, Warframe, Path of Exile (soon to be Path of Exile 2), and Apex Legends are just a few examples of zero-cost excellence on PC today. On top of that, Steam sales, free weekends, Humble and GOG giveaways, and other promotions frequently bolster the value of our hardware investments. You can spend $100 annually on games and be incredibly happy.

Most recently, Epic's retail ambitions have meant a steady stream of brilliant freebies, including favorites such as our 2018 GOTY Into the Breach, Subnautica, and Shadow Tactics: Blades of the Shogun, as well as financial cushions for new and upcoming PC releases such as Control, Outer Wilds, Ooblets, and Griftlands, to name just a few. Epic's aggressive strategy has returned plenty of resentment, but the benefits of competition have outweighed the headache of platform fragmentation, which was already happening by way of Battle.net, Origin, uPlay, and the Microsoft Store.

There's no reason to predict a lull in 2020. We don't know if Cyberpunk 2077 will be everything it's touted to be, but the scope of CD Projekt's ambition is exciting. Valve is going all-in on VR with Half-Life: Alyx, the first Half-Life game since 2007, which at worst will be a fascinating test of the platform's capabilities. Mount & Blade 2's open-ended medieval roleplaying is finally on the way. And there are hundreds of other big studio and independent games in the works. I'm particularly excited for The Eternal Cylinder, the next game from the always-peculiar Chilean studio ACE Team.

In the processing world, expect 2020 to match the pace of the past 10 years: We'll see new CPUs and GPUs, but older models will continue to suffice so long as you aren't chasing ray tracing or 4K. The new consoles releasing at the end of the year may eventually result in a mild bump to minimum requirements, but with so many PCs (and consoles) that don't support ray tracing, we expect existing hardware to remain viable for several years at least. You won't get maximum performance, and you won't be able to turn on all the fancy effects, but you won't be locked out of any games.

Virtual reality may see more rapid development. The all-in-one Oculus Quest has broadened VR's reach, and Valve has gone all in with its own headset, the Index. VR got off to a modest start, but that framing ignores that it also went from sci-fi speculation to reality in under a decade. The young technology is still in a period of rapid iteration and advancement, and as the '20s progress, expect VR games to become much more prominent—along with the accessibility issues they present. Boneworks selling 100,000 copies in its first week is a good start.

I don't expect cloud gaming services like Stadia to have a substantial effect in 2020—if they can at all, it'll take at least a few more years to change the strong relationships we've formed with boxes. However, the growth of subscription services such as Xbox Game Pass is already making a difference. Game Pass remains dirt cheap during its introductory period, and offers subscribers over 150 games with the promise of more throughout the year, including the Yakuza series, a bunch of Final Fantasy games, and new releases such as Wasteland 3 and Ori and the Will of the Wisps.

Game Pass is a fantastic deal right now, but if the switch from physical discs to digital licenses was a partial loss of ownership, subscriptions are its total obliteration. EA has Origin Access Premier, Ubisoft recently introduced Uplay+, and others may follow course. There's been no hint of it, but it's not entirely absurd to imagine Steam one day introducing a Kindle Unlimited-style program that offers access to a portion of its library for a monthly fee.

As new models and technologies bring new opportunities and new problems, the old ones stick around, and we'll continue to grapple with the issues that characterized the 2010s. The gaming scene has hardly been a bastion from hatred and prejudice over the past decade, nor has it shown exemplary respect and fairness to its workers, many of whom still deal with discrimination, crunch, mass layoffs, and sudden studio closures. Loot boxes may be going out of fashion, but that doesn't mean the end of manipulative and aggressive monetization. And the increasingly close relationships between developers and players—who might today be streamers, YouTubers, crowdfunders, esports pros, modders, hat designers, or subreddit admins—increases the probability of both collaboration and conflict, symbiosis and abuse.

But with the threat of stagnation thoroughly dismissed, PC gaming is full of exciting and positive unknowns. The staples from 2010 still exist—a new Call of Duty still marks the late summer harvest every year—but 10 years later, we're practically in a new dimension. At least one exciting new genre springs to life every year now, and there are no more shoo-ins. Perhaps Cyberpunk 2077 will be the most important game of 2020, but it feels just as likely that something unexpected out of Estonia will steal the spotlight before the year ends.