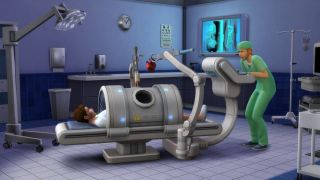 The Get To Work expansion pack for The Sims 4 will let you micromanage your Sims through various careers, including doctoring, sciencing, businessing, and, as shown in the latest trailer, detectiving.

The neat thing about this is that it adds the concept of murder to the spotless Sims universe. Don't expect meticulously posed corpse sculptures a la Hannibal, though. In fact, murderers in the Sims universe manage to do their work without leaving a drop of blood behind. Maybe sims don't have blood. Think on that as you watch detectives detectiving in the new video.

And here's a video showing Sims doctors doing doctor things, though last time I checked doctors couldn't tell the sex of an unborn baby by touching the pregnant woman's belly. Also, still no blood. Maybe they are all empty eggshell people with faces painted on.

Get To Work will cost £30 / $40, which seems like rather a lot. We'll be able to create our own mini Rust Cohles when the pack is released in April.