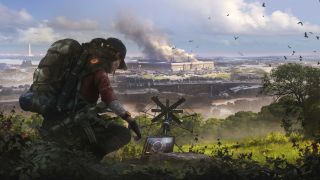 The Division 2's second episode, Pentagon: The Last Castle, arrives this month bringing new main missions, a new specialization, a new PvP mode, and more. For Year 1 pass holders, The Last Castle will be available on October 15. For everyone else, it'll arrive on October 22.

There's also some unfortunate news for both groups of players: The Division 2's second raid has been delayed and won't arrive alongside The Last Castle.

"The additional time allows the development team to focus on the overall quality of The Division 2, while developing a raid that will better meet the standards of its players," reads a press release sent to PC Gamer.

As for The Last Castle itself, it'll take players to the Pentagon, where they'll find the Black Tusk have already moved in and are attempting to take control of a bioreactor that can cure the green poison—the strain of smallpox that started this whole dang mess. The second main mission takes place in the DARPA research labs, where players will battle the Tusk in a network of tunnels built during the Cold War.

The Black Tusk are tough customers, so luckily a new character specialization is being added in Episode 2. It's The Technician, whose signature weapon is a multiple-missile launcher capable of locking onto and firing at six different enemies at once. This class also has access to an EMP grenade mod and carries a Maxim 9 sidearm. The Technician is available immediately to Year 1 pass holders, while other players can unlock it by completing certain objectives.

A new PvP mode is also coming on October 15, called Team Elimination. "The new Team Elimination PvP mode pits two teams of four into a best-of-seven round battle in D.C.," reads the press release. "Rounds will end once an entire team has been eliminated or time has expired." A new PvP map, called "Wharf," is also included, set at an abandoned fishing harbor. And, exclusive for Year 1 pass holders, two new classified assignments are being added, pitting players against The Outcasts along the Potomac River and at the Mexican Embassy.

If you've never played The Division 2, fear not. A free weekend is coming so you'll be able to check it out, no strings attached—though we don't have the dates yet. When we know, you'll know.