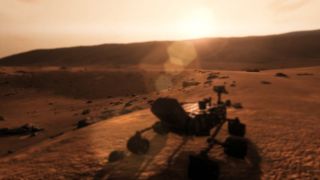 Bohemia has posted a development roadmap for their Martian rover sim, Take On Mars. From January to June, it maps out a timetable for remaining development features—including a beta release in April, and an official launch in June.

Along the way, a variety of new features are planned. Competitive multiplayer is due out next month, and a Manned Space Program mode is planned for March. "This will be story driven, focusing on survival in a catastrophic failure scenario," writes project lead Martin Melicharek. "I am sure this culmination to the Space Program mode will whet the appetite for playing with friends online in the Cooperative or planned Competitive modes."

Take On Mars recently made Andy's list of the PC's most relaxing games. Survival sounds like a slightly more stressful addition, but basic red planet exploration will no doubt remain as soothing as always.