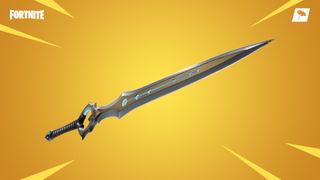 Update:  The sword Epic teased last night is the Infinity Blade, the titular weapon from the developer's mobile game, and you'll be able to get your hands on it today. It's a mythic sword only found on Polar Peak and only one will appear per match.

The Infinity Blade can destroy buildings and kill enemies with one hit, doing 75 damage to humans, and there's an alternate fire that lets players leap great distances and cause plenty of destruction.

Wielders of the sword get supercharged—thanks, magic!—with increased health that also regenerates at 1 HP per second, a burst of health with every slain enemy and increased movement speed.

You can only carry the sword, however, and nothing else, aside from building materials. If you pick up another item, the sword gets dropped and someone can pinch it right from under your nose.

Patch 7.01 introduces the sword and is available now. Check out the full patch notes. Here's GamesRadar's James Jarvis picking it up:

Original story: In case the addition of planes last week didn't provide enough new stuff to occupy your time in Fortnite, today Epic has teased the addition of swords to the game as part of Season 7. As with the turnaround on all things Fortnite, it's likely we'll see swords added to the game in an update coming very soon.

The trailer above is pretty much all we know about swords—it'll be interesting to see how they fit into the game. We've seen blades become a popular fixture in Destiny, for example, because let's face it: it's never not fun to twat an opponent with one, no matter which game you're playing.

No doubt our resident Fortnite expert James will have something to say on swords in Fortnite, and how players are making use of them. He did just that with Fortnite's stunt-friendly planes last week.

Fortnite Season 7 will last two weeks longer than expected so the developers can take a winter break—in the run-up to the holidays, though, the rate of new stuff still seems pretty breakneck. We'll keep you updated on when swords land in the game.