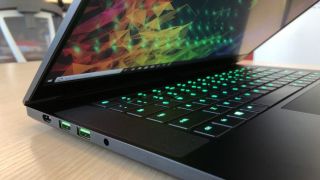 It's still too early to write the obituary for mechanical hard disk drives (HDDs), but the landscape is definitely changing. Solid state drives (SSDs) are faster, they don't have any moving parts to worry about, and they've come in down in price exponentially over the past decade. It's no wonder that in the laptop space, HDDs are hanging by a fingernail, at least in Western Europe.

That's according to Context, a market research firm that says over 93 percent of new laptops sold in the fourth quarter in Western Europe had SSDs as their primary storage component. Just two year prior, SSDs were found in two-thirds of laptops (66.7 percent).

This was bound to happen as SSD pricing continued to become more favorable. However, Context also points to other factors that have led to the near-abandonment of the HDD.

"The sharp fall in price per gigabyte observed in 2019 is the main driver of accelerating SSD adoption as it enables vendors to sell SSD configurations at competitive prices," said Gurvan Meyer, an analyst at Context. "Meanwhile, online storage services are getting cheaper, and the use of streaming online services more common, so there is less need for high-capacity local storage."

"The majority of consumers have now experienced the advantages that SSDs bring to day-to-day computer use so are happy to pay a little more for a machine with this type of storage," Meyer added.

Context predicts that by the end of 2020, every new laptop sold in Western Europe will sport an SSD as the primary storage drive. The Netherlands will likely get there first—it's nearly an HDD-less region already, with only 2 percent of laptops and desktops combined having an HDD in 2019.

"Germany follows—there, SSD share of the overall PC market is 93.4 percent—and the UK completes the podium with only 9.9 percent of PCs sold in the country in Q4 2019 containing HDDs. The transition is slower in Southern Europe where an average of 85 percent of PCs sold at the end of 2019 came with SSDs."

Context's prediction is only slightly bold, though it does hinge on NAND flash memory pricing holding steady and/or continuing to decline. Either way, the SSD has been the best thing to happen to PC hardware in the last decade, and that will remain true whether it completely takes over this year or not.