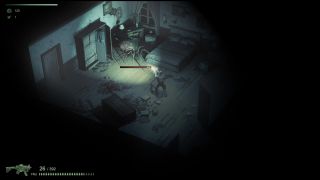 Supernatural ghost-hunting romp HellSign launched on Steam early access on Friday, reminding us that haunted houses aren’t just for Halloween. It’s an investigative RPG where, as a paranormal expert, you take on jobs for cash, finding clues in abandoned crimes scenes and getting junk flung at you by angry poltergeists. Take a gander at the launch trailer.

I’m not a great paranormal investigator, it turns out. Actually, I’m OK with the investigation bit, it’s the not getting killed by giant bugs part that I’ve been struggling with. There are different types of jobs, but as a novice with no reputation, I was clearing out nasty spiders and centipedes (of the gargantuan variety) and scouting haunted houses for clues with my trusty EMF device and blacklights.

The lighting, visual distortions and audio all work hard to fray the nerves. I love an isometric horror game, and HellSign uses the perspective really well. You get this broad view that makes it easy to investigate and explore, but the darkness means that your field of view is limited to what your torch illuminates. Opening a door to a new room is always fraught with danger. For this brief moment, you can only see a tiny sliver of the room, illuminated by the opened doorway. It’s not until you take the plunge and actually walk into it that you’ll know if it’s empty or if some skittering nightmare is waiting for you.

What I wouldn’t do for a target lock when the action kicks off. I’m not the quickest draw in the west, but I’m normally better than this. I can barely hit a giant spider. I’m far from the only one, judging from the Steam user reviews. The creepy crawlies are incredibly fast and equally hard to hit, which can be a bit frustrating when you’re still trying to get into the swing of things. There are lots of different weapons, so I might have to start using something a bit more forgiving. I should probably hunt down a shotgun. Judging by the skill trees and long list of tools, there are going to be a lot of ways to clear a home of supernatural monsters.

Developer Ballistic Interactive is hoping to reach 1.0 in about a year, but only if things go according to plan. They never do. Right now, you can play one of three planned chapters, featuring 13 different monsters, three bosses and lots of very, very sweary Australians. HellSign is definitely the fastest a game has ever gone from zero to the c-word.