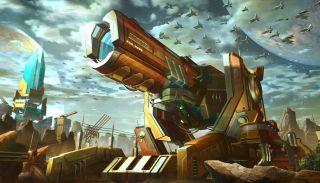 Games like Plants vs. Zombies, Kingdom Rush, and Orcs Must Die are not the only tower defense games, but they are arguably the poster children for the genre. Apart from They Are Billions, tower defense games tend to have whimsical tones, an aesthetic that can be at odds with what is a surprisingly intense style of game.

Siege of Centauri brings seriousness and danger to the genre and tonally feels closer to the games that laid the groundwork for tower defense, like StarCraft. But Centauri's gameplay feels closer to something like PixelJunk Monsters, with clearly defined locations for placing your weapons and a straightforward upgrade path as you work your way through the campaign. It's a bit too derivative, even if I still enjoyed blasting endless waves of alien robots.

Siege of Centauri takes place in the universe established by real-time strategy game Ashes of the Singularity. I always appreciate an effort to put multiple disparate games from a single developer under one umbrella, but it adds little to the story in this instance. Every level features a different character offering up a cryptic monologue before each mission about the plight of the location you’re trying to protect and the robots that must be defeated. Some characters return for additional monologues in later levels, but my eyes usually glazed over as I waited to start the fight. In his review of Ashes of the Singularity, Leif Johnson wrote, "The characters are as memorable as the back label of a Hershey's bar," and I can confirm they haven’t grown much in the intervening years.

The plot and characters may be underwhelming, but it doesn’t hold back the overall experience, even if Siege of Centauri doesn’t innovate in any dramatic ways. Before each level you get a chance to survey the various routes the robots will potentially take, see where they will be coming from, and it even gives you a good idea of the kind of robots that will be invading. I appreciate how much information is available before you start, and nothing begins until you place your first weapon so you have plenty of time to figure things out. Nothing is more obnoxious in a tower defense game than having to fight off a unit you don’t understand after you've invested so much time and currency in fighting off something different. All the information and prep time helps to avoid this.

The maps are basically a series of cliff-lined valleys that the enemy robots travel through. Your placement options are at the top of the cliffs with grids appearing to show you where your weapons can be dropped. In general, the grids are substantial and allow you to overload just about every location with powerful, dense pockets of turrets. When you place a gun, it gets a full animation of it being flown in and dropped into position. No sudden, magically appearing weapons here. I especially liked sending in a whole collection of weapons and watching them all get flown in by an army of drone delivery ships.

You can pause the action (though the option runs out if overused) to get more specific with your weapon placement without fear of being overtaken by robots, which is helpful. During the occasions where you’re ahead of the game, you can also speed things up, which I was especially thankful for in the early tutorial missions.

Each level you complete awards you a new weapon, or more tech-focused tools like the Scavenger Module, which helps you gather additional energy to spend more on weapons during the course of battle. You also earn upgrade points that you can use to advance the weapon you already have. I especially enjoyed boosting my Light Rail Gun, the cheapest weapon, as much as possible just so I could fill the battlefield to the brim with defenders.

It was during mission 5, after listening to a robot with five eyes named Milton warn me that the enemy’s strength was increasing, that I was able to put this simple, but effective strategy into practice. The layout of the level only had two points of enemy entry so I dumped all of my currency into my leveled, but simple turrets and overloaded the entrances. Since I was able to buy so many, it was almost comical watching all the delivery drones drop so many turrets into just two locations.

Rushing the waves as my turrets absolutely obliterated the attackers was satisfying and strangely relaxing as I basically had nothing to worry about. A few robots made it through, but I had another "just in case" bounty of turrets set up right near the colony that had no problem with the stragglers. The difficulty ramped up shortly after, that leading to more intense missions and last-second decisions, but I always found new strategies like the one on mission 5 that were fun to execute.

Along with the campaign, which is made up of a collection of dedicated levels, you can also tackle Endless Mode, or scenarios created by others. The Map Editor is expectedly complicated, but having an integrated creator is always a good thing for those who will potentially dive deep into Siege of Centauri and want more.

I probably won’t be one of those people. Siege of Centauri plays like a basic tower defense game with many concepts I have used before and it did little to get me excited about what was coming next. It's a perfectly adequate game. But the serious sci-fi tone is something I don’t typically associate with the genre, so Siege of Centauri at least feels unique in that way.