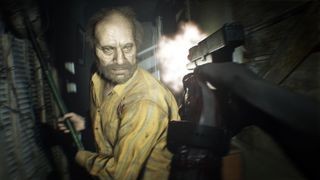 Capcom has released its updated sales figures for its best-selling games, with Monster Hunter and Resident Evil dominating the top 10 charts.

The big news from Capcom's latest update, which includes sales up to December 31, 2019, is that Resident Evil 7 has broken seven million sales. It continues to be the third best-selling game in the series, behind RE6 (7.4 million) and RE5 (7.6 million). Its launch sales were considered disappointing, shifting just over half the copies RE5 and RE6 managed in a six-month period, so to see it pick up pace in the years since its 2017 launch must be a moment of relief for Capcom.

Resident Evil 2, meanwhile, has finally overtaken… Resident Evil 2. Last year's excellent remake has reached 5.8 million sales, almost a million ahead of the original game for the PlayStation, which sits in the rank below it at 4.96 million. The remake has gained over one million extra sales since Capcom's last update of the list, which counted copies sold up to September 30, 2019.

Monster Hunter World's Iceborne expansion wasn't released on PC until January, meaning sales for the platform aren't included here. Despite that, it managed to make a respectable 3.2 million sales on consoles since its launch in September 2019.

Devil May Cry 5 is also now officially the best-selling game in the series at 3.1 million sales, surpassing Devil May Cry 3 and 4. It's by no means Capcom's best-selling series, but having the latest game do well both critically and commercially has to mean we'll be seeing more Dante soon, right?

The only major black mark on Capcom's renaissance right now is its fighting game division. Street Fighter 5's 4.1 million sales has only just outsold the original SNES release of Street Fighter 2 Turbo. If you combine the various editions of Street Fighter 4, it also continues to outsell its successor. Still, Street Fighter 5 is still in the top 15. The same can't be said for Marvel vs. Capcom Infinite—that's currently at #60 with 1.4 million.

To recap, the current top 10 best-selling Capcom games are:

Fighting games aside, the publisher seems well and truly back. Between Monster Hunter World, Resident Evil 2 and 7 and Devil May Cry 5, and with Resident Evil 3 looking to deliver too, we're in the middle of a Capcom golden age that nobody could've seen coming five years ago.

Here's hoping it can maintain this level of quality… at least until we get a new Bionic Commando. Please, Capcom.