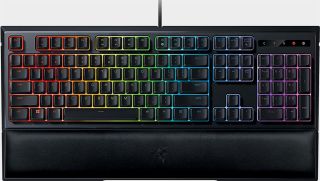 You've heard the phrase a carpenter is only as good as their tools, but that does not just apply to woodworking and things of that nature. When it comes to gaming, your accessories matter. If you've been getting by with a cheap keyboard, considering an upgrade, like Razer's Ornata Chroma.

Amazon is selling the Ornata Chroma for $54.99 right now. That's $45 off its list price, and though it doesn't typically sell for its full MSRP, it's still around $25 cheaper than what it usually goes for. This deal also plunges the Ornata Chroma into relatively affordable territory, as it applies to gaming planks.

Razer Ornata Chroma Keyboard | Mecha-Membrane | $54.99 (save $25)
This is a membrane keyboard, but Razer designed the keys to feel and sound like a mechanical deck. It's not a perfect marriage of both worlds, but it's a good keyboard at a great price with this discount.
View Deal

The Ornata Chroma is what Razer calls a "mecha-membrane" keyboard. That's a fancy way of saying it's really a membrane keyboard, but with specially designed keys built to mimic the tactile click and feel of a mechanical switch (it's somewhat similar to Cherry MX Blue switches). It's not as good as an actual mechanical deck and so it's not going to challenge the best gaming keyboards. However, it's certainly better than a traditional membrane plank, and the price is right.

This keyboard sports individually backlit keys with RGB lighting (or Chroma, as Razer likes to say). It doesn't offer any dedicated gaming keys, but it is fully programmable, with support for macros. It also comes with an ergonomic, magnetic wrist rest made of soft-touch leatherette.