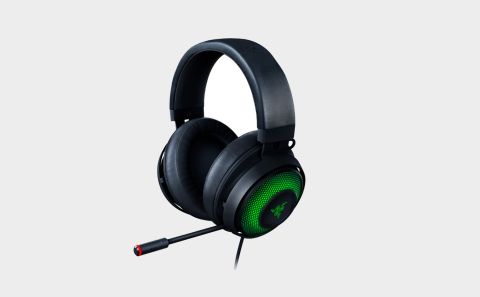 The Razer Kraken Ultimate is a solid PC gaming headset anyway you cut it. Fantastic THX sound, sleek and comfortable design, solid construction—the only thing it's missing is a chat mix.

Razer has released yet another Kraken headset, this time dubbed with an 'ultimate' moniker—pretty accurate considering Razer's Kraken Ultimate has combined the best features of its existing Kraken line-up: USB connectivity from the Kraken X; THX digital surround sound from the Kraken Tournament Edition; and gel-cooled memory foam ear cushions from the 'new and improved' Kraken. There's a price tag to match, $129.99, more compared to similar headsets with a chat mix, which the Kraken Ultimate lacks, but it's not outrageous. What you get is a light-weight, well-constructed, stylish headset that feels great and sounds great.

Sound-wise, the Kraken Ultimate lives up to its THX promise. Whether playing games or watching a movie, environmental sounds were richer and fuller, and I could easily hear subtle environmental details like birds chirping or leaves rustling from the wind. So THX naturally makes this headset great for shooters that rely on directional sound, as well as slower-paced, first-person POV games that are visually and auditorily-rich. For the average music listener, the Kraken Ultimate does its job, but it's no audiophile headset; stereo mode is still the best default setting for music. You can turn on 'bass boost' in Razer Synapse, but depending on the song it might sound a little muddy if you don't mess with the equalizer settings.

Synapse can also designate what programs should and shouldn't have THX enabled, as well as set individual EQ profiles. It will automatically detect any new program you open, and from there you can select 'stereo' or 'THX' from the dropdown menu to the right. You won't have to worry about toggling the THX mode on and off when you switch from a game to something like Spotify.

While you can expect stellar sound quality across all major headset brands, they all have their distinctive styles, which means no two headsets fit around your dome the same way. Some are too tight or loose, or stick out too far on the sides or top. Over-ear cups can overwhelm someone with a smaller head. Stiff, leatherette cushions—or too little cushion—can press the arms of your glasses into the side of your head, or any ear piercings through your cartilage. Sometimes getting new eyewear can turn a once comfortable fitting headset into a torture device.

I have both glasses and ear piercings to contend with, so finding a comfortable headset is like searching for a tiny insect in one of those hidden object puzzles. I thought I found my golden ticket first with Steelseries' Arctis 3, and then with LucidSound's LS 25 and LS41, but the Kraken Ultimate headset usurps those as the most comfortable.

The memory foam ear cups are a great balance between firmness and softness—just enough give to where they still feel secure, but aren't pressing awkwardly on or around my ears. There's also a layer of cooling gel on top of the memory foam, covered by cloth instead of leatherette fabric so your ears won't feel like they are suffocating. The earcups still overwhelm the sides of my head, though, but the band is far more form fitting around skull than any other headset I've tried. Normally, headband arches are too wide, leaving enough of a gap where the band meets the top of the cups for me to slip more than half of my hand through. Even my older Razer Kraken Pro Soldier 76 edition headset has this problem.

But smaller heads should find a near-perfect fit with the Kraken Ultimate. Not only is it head-conforming (I can slip only two fingers through the sides instead of a hand), but the band itself is wider than other headsets by at least a half-inch, which distributes the weight of the entire headset over your head more evenly. And the band is padded with the same memory foam, so the whole thing feels nice and snug without being constricting. My only complaint is that the earcups leave a slight gap at the bottom, so there isn't a total noise-canceling seal, but they're quality otherwise.

Some other nice features of the Kraken Ultimate headset are the volume wheel on the back of the left earcup and the surround sound toggle button above that. The microphone mute button is built flush into the tip of the mic itself, so all you need to do is gently squeeze the sides to mute and unmute. An LED will light up at the end to signal that it's muted. It's sleek, sure, but a little distracting when you can see a glowing, red mass in your peripheral.

Personally, I either leave it unmuted with push-to-talk on, or retract it back into the headset and use my stand-alone Blue Yeti—which is such a waste because the mic on the Kraken Ultimate is actually good. You'll need to manually adjust levels in your sound settings and in Razer Synapse, though. At normal volume, your voice comes across super soft, so I had to jack mine up to the max. But once you're done tinkering with it you'll come through crisp and clear, and loud enough thanks to its cardioid pattern.

I recommend not using the 'active mic noise cancellation' filter, though. It makes your voice sound muffled, like the sound of that automated voice that says 'thank you for holding, we'll be with you shortly' when you're on the phone with customer service. It's best to use either 'volume normalization' or 'vocal clarity', as they are indistinguishable from one another—but not together as the treble sounds harsh.

Your voice still won't sound as warm as rich through a standalone mic like the Blue Yeti, but if you're not streaming or podcasting, the Kraken Ultimate headset mic gets the job done well. The mic will also pick up any typing noise in the background, no matter how you adjust the sensitivity setting. This won't be an issue in-game if you have push-to-talk enabled, but it could be if you don't. In virtual meetings, though, where there's no shooting or dialogue barks to distract from the clacking, you'll definitely hear every keystroke.

Of course, it wouldn't be a proper Razer ultimate edition if RGB wasn't incorporated. I have come around to love RGB, but I like my lights static, and when you have RGB in nearly every peripheral on your desk, cycling or pulsing lights, no matter how slow, get nauseating after a while—and forget about trying to easily sync up your components and peripherals when you're using four different manufacturers' products. Anyway—even with the brightness set to 100, the LEDs on the Kraken Ultimate shine softly instead of blinding like a spotlight. RGB has grown on me over the years and, yeah, you're paying extra for something that has no practical purpose, but RGB is the fashion of the PC gaming world, and fashion doesn't always need to be practical.

The Kraken Ultimate is an easy recommendation for Razer fans looking to upgrade their headset. It might be a harder sell for others because of the lack of a chat mix for the price point, but it holds its own against similar headsets for the specs. Its comfort is superior to a lot of other headsets, so those with smaller heads, glasses, and/or piercings should definitely consider making this their next headset. The earcups will look giant on you, but your temples will thank you.

The Razer Kraken Ultimate is a solid PC gaming headset anyway you cut it. Fantastic THX sound, sleek and comfortable design, solid construction—the only thing it's missing is a chat mix.