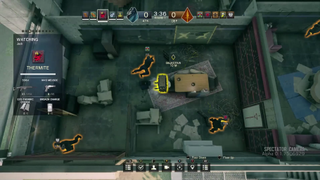 Watching other people play games is all the rage these days, but Ubisoft wants to take that further with Rainbow Six Siege. The Spectator Cam lets you see through the eyes of any player, watching them carry out decisions in real time. Best of all, it lets you switch player at any time, so you can watch one team lay a trap and then switch to a player on the other team to catch their reaction.

Additional options include an outline that makes it easier to spot objectives and tell players apart from one another, which is particularly useful in the bird's eye "tactical view". You can also use player cards let you track people's weapons, munitions, and health.

Ubisoft is selling this as a way to pick up tactics from other players, to find out what works and what doesn't, but you could also pretend that you're the one playing and convince your housemates that you're really good. Or at least confuse them when you put down the controller and the person on screen keeps shooting. They might be secretly hoping that Rainbow Six: Siege picks up a dedicated viewership, the sort that could set up R6 as an esport.

PC owners have lucked out this time: we get the beta for Spectator Cam when the game launches. A more polished version for all platforms is due next year.