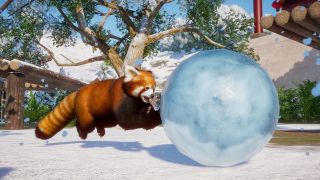 Planet Zoo developer Frontier is apparently celebrating the festive period by releasing new animals, props and scenarios in its first bit of DLC. And by 'celebrating,' I mean selling it for £8/$10.

The Arctic Pack, due out on December 17, introduces new animals, like the polar bear and arctic wolf, into zoos, along with a pair of themed scenarios, Mexican and Norwegian biomes, and hundreds of foliage and scenery items. I've been thinking about making a beartopia, so this is excellent timing.

Alongside the paid DLC is a free update that gives everyone a few new features that aren't quite as exciting. There's an aging slider to slow down the animal's life-cycle, you can see immediate family members in the info panel and you can keep an eye on your zoo with new heat maps. Everyone will also get new nature assets and enrichment items, along with fixes and tweaks.

Frontier also released some zoo stats. 62 million animals have been born in these digital zoos, apparently, but less than 15 million of them have been set free to frolic in the wild. Check out the infographic below.