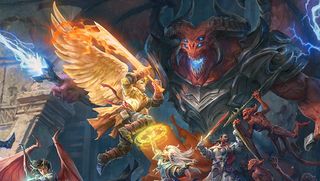 Owlcat Games has announced that it is launching a Kickstarter campaign to help fund the next game in the CRPG Pathfinder series, Wrath of the Righteous. In a news post on Owlcat's official website, the team explains that the Kickstarter will launch on February 4th.

The post doesn't go into detail about the campaign, but Owlcat says that it wants to make its next game "better than the previous one in every aspect." Alongside the campaign, Owlcat will reveal the main features of Wrath of the Righteous with a gameplay video and details about what it's adding and improving.

The developer's previous Pathfinder game Kingmaker was also funded through a successful Kickstarter, raising almost double their target goal with 18,000 backers. In our Pathfinder: Kingmaker review, Andy Kelly wrote that it has some good ideas but ultimately plays it too safe.

Both Kingmaker and Wrath of the Righteous are based on the Pathfinder tabletop RPG and inspired by classic RPGs like Baldur's Gate and Fallout. To keep up with the project, you can sign up to Owlcat's newsletter on their website.