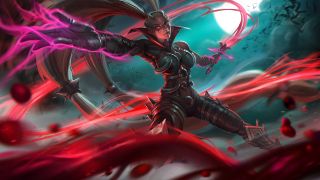 When Mad Head Games' creative director Uros Banjesevic tells me that three things set Pagan Online apart from Diablo 3 and its ilk, I'm not sure whether to believe him.

Every action RPG is measured against Blizzard's yard stick, and developers want to emulate the success of the Diablo series while also trying to set themselves apart from the crowd. It's a tough balancing act and even Path of Exile, now one of the most successful games on PC, took years of incremental updates to properly forge its own identity.

But after spending a few hours squashing demons, spiders and warlocks in Pagan Online, my scepticism has been eased. Its core is what you'd want from any solid action RPG—crunchy combat with cool combos and plenty of loot—but its structure is different to what I expected.

Its lengthy, eight-act campaign is split into bite-sized quests on self-contained maps, most of which you can finish in ten minutes: you drop into each map, fight through groups of enemies, listen to some dialogue and then battle a boss at the end. I like that you'll be able to jump into Pagan Online and make progress in the story even if you only have 20 minutes spare.

The way you move your characters is also unusual for an action RPG in that you use WASD, rather than mouse clicks. I prefer this keyboard movement because it's more flexible—I find it far easier to move in one direction while attacking in another. You can retreat from a big group while firing off stun-shots behind you without worrying that a mis-click will cause you to change direction.

The MOBA-inspired heroes are another way Pagan Online tries to stand out. They're very much characters rather than classes, with distinct, over-the-top aesthetics and unique playstyles. They each have seven abilities, including one on a long-cooldown that's a bit like an ultimate, and I enjoyed finding out how they interacted with one another.

I spent most of my time with Istok, a slow-moving tank that can summon a shield. The more punishment your shield takes, the more "static charge" you build up and therefore the more damage you deal. The basic cycle I followed was, first, to taunt enemies, forcing them to focus their attacks on me. Then, I'd pop my shield to absorb the incoming damage, building up charge. Just when my shield was falling I'd trigger Overpower, a spinning attack that dealt damage to anyone nearby and healed me for each enemy I hit.

The combat felt suitably crunchy, and all the attacks created flashy effects. When I slammed Istok's giant hammer it tore the ground beneath enemies' feet, and when I swung it in circles a bright blue trail followed. I'd have liked it more if his base attack had a little more heft, though. He's a big guy wielding a giant stone cudgel, but on your first click he just lazily wafts it towards an enemy, which is underwhelming.

I also played a few missions with Morokh, a hooded, skeleton assassin with glowing green eyes. They were much faster than Istok, and my tactics revolved around their "Shadow Step", which makes them run faster and inflict a curse on any enemy they pass through.

Once I'd cursed as many enemies as I could I popped "Soul Drain", which consumed all the curses to inflict bleeding damage and heal me over time. Despite the same self-healing pattern it felt very different to controlling Istok, and I'm looking forward to getting to grips with the other six characters when Pagan Online launches into Early Access next month.

When you first boot up the game you pick one hero, and then slowly unlock the others by collecting character shards. Loot that you pick up—weapons, crafting ingredients and stat-boosting jewellery—can transfer between characters. Not every character can use every item, but I like that you have a reason to keep loot even if it's not useful for your current hero. Eventually, once you've unlocked multiple characters, you'll be able to swap between them at any time.

Speaking of loot, you'll be pleased to hear that Pagan Online has buckets of it spilling out of every enemy. As well as new weapons you'll pick up emblems, wards, glyphs, rings and amulets, which boost your attributes. They're the main way of customising your character: I found an emblem that added poison damage to my weapon, and a glyph that boosted my dexterity.

They felt a bit too abstract for my liking. I couldn't tell you the difference between an emblem and a glyph, for example. They don't look particularly distinctive in your inventory and they're not physically represented on your character at all, which is a shame. There are no individual armour pieces, and the only way to change your character's appearance is through skins that you unlock with character parts (but don't worry, there are no microtransactions).

That said, I had fun slowly upgrading my stats. Having separate slots for all the different item categories—rings, amulets, wards, etc—meant that I had something better to equip after every fight, and plenty left over at the end of each mission. That included crafting material to create new weapons, and each crafted item can be "reforged" an infinite number of times, which means you can keep improving your loadout and never have to throw away your favourite weapon.

I'm not fully sold on the 'Online' bit of Pagan Online yet. It suggests that multiplayer is at the core of the game, but that's not really the case—you'll be able to take on the campaign and missions in two-player co-op, but that's pretty much it. After each mission you return to a Pantheon, a hub in which you'll find a merchant, a crafting table, and a space to upgrade your abilities. 50 players will fit in Pantheons, but it doesn't sound like there will be much to do other than chat and admire each other's skins, and I worry that Mad Head won't be able to make these spaces feel alive.

The team also hadn't fully worked out drop rates for items and character shards when I tried the demo build—my hope is that you'll unlock everything at a fair clip. I'm also curious to see how difficulty changes in later story acts, because the ones I tried felt a tad easy even when I turned the difficulty up. But again, that was early in the game, so it's to be expected.

Those unknowns aside, I'm impressed by what I've seen of Pagan Online so far. The combat is snappy, the loot plentiful, and the bitesize structure makes it feel different to any other action RPGs I've played. If you're a fan of the genre, it's one to watch.