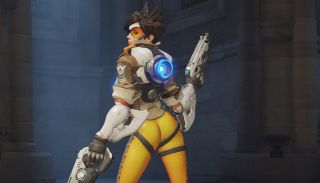 Update: Overwatch director Jeff Kaplan has responded to the inevitable outcry following his announcement that Tracer's victory pose will change. "We understand that not everyone will agree with our decision, and that’s okay," he wrote in a new update. "That’s what these kinds of public tests are for. This wasn’t pandering or caving, though. This was the right call from our perspective, and we think the game will be just as fun the next time you play it."

His full statement can be read here.

Blizzard says it will remove an “over-the-shoulder” victory pose by the Overwatch hero Tracer, following a complaint on the Battle.net forums that it turns the time-bending teleporter into “another bland female sex symbol.”

“We aren't looking at a Widowmaker pose here, this isn't a character who is in part defined by flaunting her sexuality. This pose says to the player base, oh we've got all these cool diverse characters, but at any moment we are willing to reduce them to sex symbols to help boost our investment game,” the user, Fipps, wrote in a lengthy post.

“I have a young daughter that everyday when I wake up wants to watch the Recall trailer again. She knows who Tracer is, and as she grows up, she can grow up alongside these characters. What I'm asking is that as you continue to add to the Overwatch cast and investment elements, you double down on your commitment to create strong female characters. You've been doing a good job so far, but shipping with a tracer pose like this undermines so much of the good you've already done.”

Believe it or not, the thread actually doesn't go immediately and completely sideways. Not everyone agrees with the point, obviously, but the conversation stays largely civil. Fipps clarifies in a couple of follow-ups that the intent isn't to be “sex-negative” but to highlight an incongruous portrayal of the character, adding that more overtly sexual poses from heroes like Widowmaker and D.va are “by all means fine” because they're a more natural fit with those characters.

“My main complaint is that there is no facet of Tracer's silly/spunky/kind personality in the pose. It's just a generic butt shot. I don't see how that's positive for the game,” Fipps wrote. “If you look at D.va's laying around pose, it's got some sexual undertones as well, but it at least still preserves some of her existing characterization.”

Overwatch game director Jeff Kaplan responded in the thread, accepting the validity of the complaint. “We'll replace the pose. We want *everyone* to feel strong and heroic in our community. The last thing we want to do is make someone feel uncomfortable, under-appreciated or misrepresented,” he wrote. “Apologies and we'll continue to try to do better.”

The soon-to-be-deleted pose is below. As always, conversation is welcome, but please keep it polite and, if in doubt, refer to our commenting guidelines which can be found here.