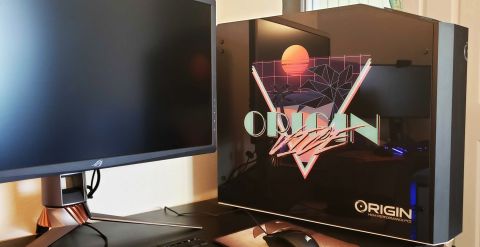 The Origin Millennium is super innovative in its approach to component configuration and other customization options, but some of the unique features also come with drawbacks for the price.

Sometimes you need the best gaming PC and a workstation. Maybe you edit video files or create your own games in addition to playing them, so the usual mid-tower or full tower case might not have the right number of hard drive bays or slots for multiple graphics cards. Origin's Millennium desktop PC may be built for gaming, but it has a ridiculous amount of space for it to become something else in addition to a gaming PC.

Chassis-wise, the unit we received came with dual vertically-mounted GPUs, but there are four possible configurations for GPU mounting that also include standard horizontal, vertical inverted, and horizontal inverted. Since the GPUs can be mounted vertically, that means the I/O panel can be configured to be on top of the case. It's hidden by a ventilated plastic cover that pops off, and has a channel in the back to neatly run cables to the GPUs and the rest of the motherboard ports.

The front facing door can be adjusted to open either right to left or left to right. It’s a solid door too, made of aluminum with steel (or another type of strong metal) hinges that allow the door to swing open smoothly. Inside are four cover plates at the top that can be removed to install optical drives or extra USB ports, and five hot-swappable hard drive bays on the bottom. The mechanism to release the hard drives from these bays are kind of similar to a printer cartridge—pull up on the top lever of the bay cover and then pull down to reveal the hard drive. Pull far enough and the hard drive pops out. These hard drive bays also come with a simple, rotating lock right above each of them, so no need to worry about accidentally releasing a hard drive.

Rounding out the list of unique case features, the Origin Millennium has two tempered glass side panels, both on hinges. Both attach to the chassis with magnets, so getting access to the interior on either side is easy and convenient—especially to change the internal layout of the components. The unit we received also had a custom printed panel on one side with Origin's Vice logo, inspired by Miami in the '80s, with white, RGB components set to match the blue and pink color scheme of the logo.

This case is massive hunk of hardware by itself at 22.5" x 8.5" x 23.5". It also weighs a ton and definitely isn't made to sit on top of your desk. It's too big to be used as just a regular gaming PC, and there isn't much of a reason to have all those extra drive bays either, since the model we received was only outfitted with a 500GB Samsung 970 Evo SSD and a 3TB HDD.

A smaller case would be a much better option given the overall list of components, but if you like the Millennium case, those HDD bays are an optional add-on. Personally I would have rather seen the space utilized by some additional fans to help dissipate the amount of heat put off by the twin GPUs, since the AIO radiator is mounted vertically at the back of the case. (More on airflow in a bit.)

The dual RTX 2080 Ti GPUs are the cornerstone of this entire rig, and it's made to accommodate them. That's where the bulk of the $5,527 price tag comes from, along with an Intel Core i9-9900K (overclocked), 32GB of Corsair Vengeance RGB Pro 2666MHz RAM, and an MSI Z390 Gaming Edge AC motherboard. Dual GPUs are overkill for the majority of PC gamers, but if you want 4K, ultra graphics, and 60 fps, a pair of super-powerful cards are necessary to get you as close to that as possible.

That part isn't so surprising, given the dual GPUs, but testing got a little weird with Ghost Recon: Wildlands. Running back to back benchmarks isn't usually a problem with a single GPU, but with two, the average fps dropped between eight and ten fps after each pass, with a high of 98 fps and a low of 80 fps. I did a second pass of four runs the following day, waiting five minutes in between runs except for the first two. Between the first and second benchmarking run the fps dropped from 92 to 81, but giving the system a minute or two to cool down yielded 87 and 86 fps, respectively.

Multi-card setups are generally inefficient for what little gain there is, maybe a 10 fps boost. That boost can make a difference in games like Metro Exodus when you want to play on the highest settings, but not every game is optimized to handle SLI scaling, as seems to be the case with Ghost Recon: Wildlands.

And while vertically mounting dual GPUs in this Millennium case looks cool, there aren't a lot of fans to suck out the hot air, especially with only a one-inch gap between the two cards and HDD bays where a cool air intake could have been set up. There was a single fan at the top of the case, which did little to push out the hot air. EVGA Precision X1 was preconfigured to run both GPUs as high as 88 degrees Celsius, which games like Ghost Recon: Wildlands and Metro Exodus hit consistently. Also, judging by settings, both GPUs came overclocked to some degree. Running a single GPU inside of the case, however, was fine.

Origin’s Millennium is still a unique beast thanks to the top-of-the-line components and Transformer-esque case. But for most gamers, all those extra drive bays and optical drive space will likely remain empty. For those who want a case that doubles as a workstation and a gaming PC, there isn't a lot of fan space nor intake ventilation, which is important for any machine running some serious hardware. The Achilies heel in this otherwise great gaming desktop PC is that the added benefits of a modular case and dual GPUs might not outweigh some of the drawbacks. If you love the case but hate the price, opt for a single GPU instead.

The Origin Millennium is super innovative in its approach to component configuration and other customization options, but some of the unique features also come with drawbacks for the price.