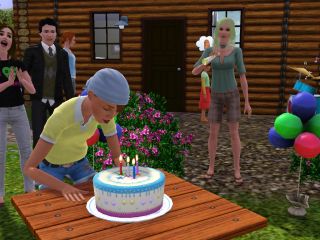 Happy birthday, The Sims! You've graduated from being a teenager into young adulthood, and you can now attend college, get a full time job, get married, have babies, adopt pets, run a business, and of course pay bills. You may not want to do all those things at once, but you're The Sims—every single one of those things can happen in the span of 24 Sim hours, especially if you know the right cheats. You can use your new found freedom for personal development, or inflict total chaos on your family members and neighbors. You have the power.

But behind every legacy family, every pile of laundry, and every ladder-less pool, there's a story, and not just the story of the virtual people we control. It's those of us who have neglected our own lives on occasion to make sure our Sims had perfect ones. Or those of us who spend countless hours building the perfect house. Or those of us who can't be trusted to not inflict torture and misery on our Sims. We may have come and gone from the game, or have consistently played every Sims game for the last 20 years, but it's not a stretch to say that those games have given us some powerful memories.

An old friend of mine introduced me to The Sims when it first came out. We were awkward 7th graders who had been raised on a steady diet of PC and console games, but nothing had captured our attention quite like The Sims. We did the stereotypical thing of making the sims versions of ourselves married to whoever was our spiky-haired, boy crush at the time, and then cried over our ugly children. But we also spent countless hours building our dream houses and saving our Simoleons for the best kitchen appliances and decor.

Inevitably, learning how to do bigger and better things in The Sims lead us to internet forums where we discovered ways to torture and kill our sims on purpose. That was the end of innocent 12-year-old Joanna and her friends. But from then on, my playing style with The Sims evolved in two distinct ways: maintaining a legacy family where everyone is rich, talented, and intelligent; and creating families where unspeakable tragedies always befall them, and performing terrible experiments.

I've made sims afraid of water, put a pool in the middle of their kitchen, and then forced them to cross it to get to the fridge on the other side if they wanted to eat. I've let filthy piles of laundry take over the house, hoarded people in my basement, and even created an entire prison. I've done a lot of terrible, no good things (and still continue to do them), but I've also raised generations of wholesome families who make a living from gardening. In The Sims, you are only limited by your imagination.

I've mostly done terrible, unforgivable things in The Sims. I took 8 randomly generated Sims and made them fight (well, chat) to the death in a poorly-envisioned battle royale. I ran an animal hospital where I ruthlessly neutered everyone's pets without their consent. I interbred a whole bunch of filthy racoons, then seduced Santa Claus and made him adopt them all. Most recently, I made a tiny house where my Sim has to eat while sitting on his bed and wash his dishes in the bathroom while surrounded by stray dogs. I think Sims games just bring out the worst in me.

But the reason I've done these terrible experiments (beyond just the fact that I'm a terrible person) is that The Sims is so flexible a simulation and sandbox that if you can think of something, you can probably do it. It allows for your imagination to run wild, even if it's a bit twisted. The best kind of games are the ones where you can enjoy playing by the rules and have just as much fun making up your own. The Sims has always been perfect for that. (And where there are hard limits, there are always mods and cheats to get around them.)

The Sims is one of the very best non-violent games on PC. It's a fascinating facsimile of life with all the edges shaved off. Poverty, unemployment, and crime rarely touch this universe. Even death is handled with good humour. That makes things even funnier for Sims torturers who like to destroy their families in creative ways, but I tend to play it straight. The home design tools in The Sims 4 are powerful enough to let you create dream mansions.

Sure, it's a big, colourful ode to consumerism, but buying bigger, better stuff is fun. I like that the expansions are getting stranger as The Sims 4 moves deeper into its life cycle, though none have come close in scope and style to The Sims 2: Hot Date, which introduced huge entertainment zones and clean, fun nightlife to the game.

What's in the box?

Let me tell you about the glass box. Boxing Sims into a tiny room from which there is no escape is a singular joy, and also the best way to unwind after a hard day at work. Look, I always start out with the best of intentions, finding them good jobs, making them socialise, putting horrifying, nightmarish works of art all over the walls. I’m not a bad dude. But then the box calls to me. The glass is a more recent addition. I realised, when I got The Sims 4, that I’d been incredibly selfish. While I was enjoying my Sims’ slow descent into madness, watching them switch from peeing themselves to crying while in a puddle of pee, nobody else was able to appreciate it. That’s no longer an issue!

Instead of boxing in my Sims, I’ve made my Sims accomplices to my terrible crimes. They’ll call over a neighbour, and when they’re in position I strike with my building tools. I cover the tiny room in windows, and plonk a comfy chair and maybe even a jukebox just outside. This allows my Sims to take a seat and catch a show, with musical accompaniment. Sometimes a crowd gathers to watch. Nobody ever tries to help my prisoners escape, telling me that Sims are all utter bastards. My kinda people. Anyway, I love The Sims, and please don’t tell the police.

I think I've spent more time playing The Sims than I have any other game. I've dabbled in 1, 3, and 4, but nothing lived up to playing The Sims 2 when I was younger. My all-time favourite thing to do was designing the houses and then decorating them. I made a giant tower with no windows for a Vampire family to move into, a tiny house with a massive greenhouse for growing veggies, and so many mansions decorated to the brim with outrageous decor.

One time I built a spooky, abandoned house but I wanted to complete the look with a graveyard. So I killed a bunch of sims on the property lot, which is kind of twisted, but it looked really good when it was done and the ghosts were floating everywhere. As each of the expansions released they came with a whole bunch of new building types, furniture, and neighbourhoods with new houses. I remember that the Apartment Life expansion has spiral staircases and it blew my mind. The possibilities!

I don't play The Sims these days, though my other half remains an absolute fiend for it. My main recollection is of building various mansions for Winona Ryder and a coterie of other Hollywood actresses to live in during the early 2000s. (I realise now that this is problematic and may lead to my cancellation. Honestly, I've had a good run and it's probably overdue.)

Of course, I used the money cheat in the hope of bringing Winona the happiness that had eluded her with Johnny Depp. Eventually, I branched out to downloading fan-created wallpapers and furniture. The quality of this stuff was mind blowing. You could get incredibly detailed, Laura Ashley-looking stuff and soon Ryder Towers was looking like a palatial spread from Town & Country magazine. I like to think that out there somewhere there is still a low-poly Winona with 'Tim Forever' tattooed on her arm.

My earliest memory of The Sims was setting up a lush mansion as my own twisted version of the MTV's The Real World with all my favorite celebrities and watching the chaos ensue. I scoured the internet for hours to download custom skins from shady Sims forums to make my dream reality show possible.

One bit I'll never forget is when Gundam Wing set the place on fire after trying to use the stove which resulted in the death of Neo from the Matrix, Ronald McDonald, and Barney the Dinosaur. Thankfully, Batman and Sailor Moon still threw killer parties despite the tragedy. Their relationship with Gundam Wing was never the same, though, but I also learned an important lesson in fire safety.