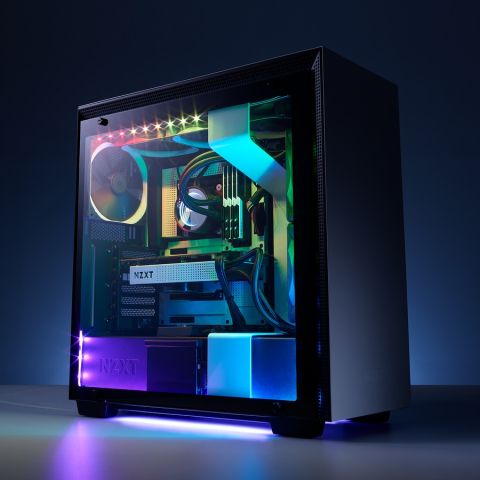 Streamlined installation and intuitive software makes the HUE 2 a versatile powerhouse of RGB.

It's the year 2019 and RGB lighting has completely taken over the PC hardware space. Nowadays, it's hard to find yourself a component that doesn't come with an RGB variant. It's a topic that's debated over and over again, but the sales numbers don't lie. Like it or not, disco party battlestations are here to stay.

NZXT has been at the forefront of this movement for over six years now following the release of its original HUE lighting sytstem. In late 2015, the company released the HUE+, an industry first for smart addressable RGB lighting controlled by its CAM software. Now the company has unveiled its HUE 2 lighting ecosystem and we couldn't be more impressed.

The HUE 2 ecosystem is comprised of the main HUE 2 RGB lighting unit, the HUE 2 Ambient, HUE 2 Underglow, HUE 2 LED strips, HUE 2 Cable Comb and several other yet-to-be announced products. We've spent some time with all of the currently released products and its clear the company has made significant improvements since the HUE+.

Akin to the similarly named Phillips Hue lighting system, HUE 2 products communicate with each other seamlessly. NZXT's CAM software has come a very long way since the company's first "smart" products, and the breadth of easy to use lighting configurations and presets that effortlessly spill across the products proves this. We were most impressed with the HUE 2 Ambient. It's essentially a much more effective version of Logitech's G560 speakers, sampling colors from the edges of your monitor and creating a soft glow that extends the lighting outward.

NZXT actually wasn't the first company to come up with this idea. Lightpack has been doing this for a few years now, but we found NZXT's solution to be much more robust and cost effective for larger monitors. HUE 2 Ambient supports monitors ranging from 21-35 inches in size and is very easily configured through the CAM software. All it takes is a couple of minutes to calibrate the software with your LED placement behind the monitor and you never have to mess with it again.

For those that prefer custom or NZXT's preset lighting effects over the screen sampling, you can easily swap between traditional HUE 2 lighting and Ambient Mode in CAM. The great thing about the HUE 2 Ambient is that it's a standalone product which doesn't require the original HUE 2 Lighting unit to work.

They may not be as flashy as Lian Li's fully RGB PSU cable, but the HUE 2 cable combs add a beautiful accent to your sleeved PSU cables or extensions. With 18 individually addressable LEDS to configure, the Cable Comb already produces enough light to brighten up your build quite a bit. Once you add the regular HUE 2 strips and the HUE 2 underglow to the equation, that's when the real party starts.

Out of the box, the HUE 2 lighting kit comes with four LED strips for a total of 40 individually addressable LEDs. When combined with the 18 LEDs from the Cable Comb accessory and 30 LEDs from the HUE 2 Underglow, the HUE 2 ecosystem produces a staggering amount of RGB lighting. They are all easily controlled through CAM, which is important as you're definitely going to need to tone things down a bit to prevent too many distractions while gaming.

There's already an excess of RGB going on with the HUE 2, but we would've liked to see a bigger improvement in the LED strips. The HUE+ strips already had 10-LEDs each, so we were expecting higher LED density strips to produce smoother and brighter lighting animations with the HUE 2. Perhaps this is something NZXT already plans to address with one of the unannounced products.

Whether you're a diehard RGB fan or someone that prefers a subtle touch of accent lighting, NZXT's HUE 2 ecosystem has something for everyone. It's definitely on the pricier side of things when you compare DIY options, but unless you're an expert on Arduino, we believe the HUE 2 is the quickest and easiest way to completely flood your battlestation with RGB goodness.

Streamlined installation and intuitive software makes the HUE 2 a versatile powerhouse of RGB.