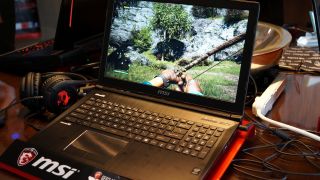 We can expect gaming time to be shorter. But with a lower-power Maxwell GPU, potentially in 40-45W territory, we could still be looking at a couple of hours of proper gaming.

There's definitely a 2GB frame buffer supporting the MSI GE62’s 1080p screen, however. And from the look of that screen it’s a neat little IPS panel, which means wide viewing angles for your gaming pleasure.

One of the things I'm most pleased about is the fact MSI have ditched the single, rocking touch-pad button in favour of separate left and right buttons. I know most use an external mouse for gaming on a laptop, but bad track-pads make me want to chew my fingers off nonetheless.

MSI is also announcing a GE72 laptop, with a larger screen, with prices for the 15-inch GE62 starting at around $1,300 when it hits the shops.