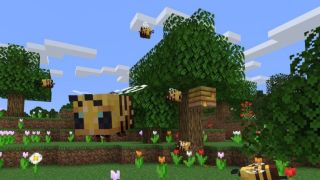 Just how big is Minecraft? In early 2019 it passed 176 million copies sold, which puts it in a tussle with Tetris as the best-selling game of all time. Today there are two versions of Minecraft still being updated, each with millions of players: Minecraft Java, the original, and Minecraft Bedrock, the modern version built to run across Windows, mobile, and consoles. Minecraft Bedrock is still playing catch-up with Java's features, but it's getting there. Meanwhile, every new Minecraft Java update brings new things to Minecraft.

This is our running catalog of what's new in both versions of Minecraft. On this page, we have the latest Minecraft Java update, while on page two we've collected Minecraft Bedrock's latest patch notes.

We don't have all the details on the Nether Update for Minecraft just yet. We don't even have a confirmed release date. But we do know a bit of what will be in the upcoming big update for the Java version of Minecraft. Here's what we know so far since Minecon 2019:

Minecraft Java 1.15 adds something that not enough of our real world appreciates enough: bees! Minecraft bees live in bee nests that spawn in flowery biomes. They pollinate flowers and crops to help them grow better, fill nests and craftable hives with honey, and can captured and farmed.

For everything else bees can do and more in this update, check out the full patch notes. Here are the highlights:

Looking through the Minecraft update 1.14.4 patch notes, minor adjustments and a variety of fixes dot the landscape. Adjustments to villager behavior, the new sieges, and some multiplayer settings changes are the highlights.

For access to the full patch notes including bugfixes, check here.

Check here for the full patch notes, including bugfixes

You can find the full patch notes, with bugfixes, over here.

For the full listing, including technical changes and bug fixes, check here.

Hero of the Village

Rewrite of Book and Quill Editing