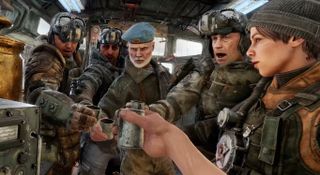 Sam's Story is the second expansion for moody post-apocalyptic FPS Metro Exodus, but it's the first to follow in the base game's sandbox footsteps. Launching next month, it charts the journey of Sam, an American marine who was stuck in Russia after the end of days hit. He's trying to make his way to Vladivostok, hoping to get back to the US.

The previous expansion, The Two Colonels, was a linear, claustrophobic affair, but for Sam's Story it looks like 4A Games is opening things up a bit, leaning into the non-linear survival shtick that made Metro Exodus feel like the closest we've come to a new Stalker.

"Sam makes his way away from the Aurora in search of a way back to the USA, arriving at the remains of Vladivostok’s tsunami ravaged harbours, ruined industrial buildings, and crumbling residential districts," 4A Games says. "To complete his journey, Sam will discover that he needs every tactic he has learned so far to survive, as his surroundings prove to be far trickier than expected."

You'll be able to explore the unfriendly Russian wasteland and root around for things to help you survive, like new weapons to take down new kinds of mutants.

Sam's Story is due out on February 11, just a few days ahead of the Epic Games Store exclusivity ending, so you'll be able to get your hands on it either via Epic or Steam.