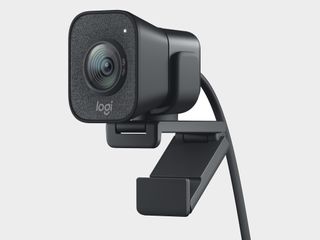 I've favored Logitech's C920 for years for its simplicity and picture quality. It's been my go-to webcam for both streaming and office meetings, but I've always found it annoying that I couldn't mount it in a number of different positions on my monitor bezel. The new webcam Logitech launched today, the StreamCam, is everything the C920 is and more, but for a lot more money.

You can mount it either horizontally or vertically, rotate it on multiple axes, and tilt it down at a full 90-degree angle. It also comes with a second mount base should you want to mount the StreamCam to a tabletop tripod instead of your monitor, and is fully supported by XSplit and OBS. It also features auto-framing and image stabilization to reduce camera shake should you accidentally bump your knee into your desk.

Here's a quick rundown of the specs:

Compared to the C920, C922, and Razer's Kiyo, you can stream at a faster framerate and higher resolution—and of course the StreamCam has vertical video, a two axis mount, and the option to use the built in microphone in a dual mono mode, which the other webcams don't.

But what stands out to here is the f-number. F/2.0 is a wide maximum aperture, so the StreamCam could be used in low light situations and still churn out a decent image. We were able to briefly test it under soft room lighting, and the resulting image looked well-lit and balanced.

However, you might want to think about getting a good secondary light source if you don't already have one anyway. Unlike Razer's Kiyo, the StreamCam does not have a built in light. Not having a good light source could cause a dip in framerate since the aperture needs to open wider to let more light in. If you care more about framerate over exposure, you might not get a perfect 60fps in super low light situations.

The StreamCam also opts for a USB-C connection instead of a USB-A. This isn't a huge issue if you have a motherboard that was made in the last couple of years, as most come with a USB-C port, but if you don't have one you can still use Logitech's new webcam. You'll just need a USB-C to USB-A 3.0 adapter, and you can usually find a two-pack for around $10.

While there is no 4K option like the Brio, it doesn't always make sense to stream in 4K, which makes the StreamCam a good choice for anyone with a C920 or C922 looking for something with more features.

Logitech also revamped its Capture software to include a Dark Mode, new scene effects, and live text overlays. You can also adjust the white balance and other image settings, as well as prioritize frame rate or exposure in the software. To get access to some scene effects, however, you will need to create a free account via Logitech Capture and sign in. You can download the software for free here. (MacOS support is coming soon.)

We're currently doing a full review of the StreamCam and will have that available soon. But if you want to grab it now, and you are in the US, France, Germany, UK, Spain or Italy, you can get it here.