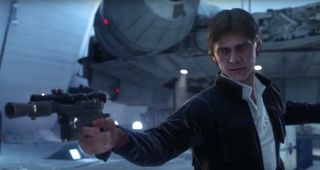 The new Star Wars Battlefront trailer released today at Paris Games Week doesn't contain much we haven't already seen: TIEs and X-Wings, red and green blaster bolts flying all over the shop, and the sort of appalling tactical goat rodeo that makes one long for the concrete competence and strategic smoothness of Admiral Ozzel. But it also provides our first look at Boba Fett, Leia, Han Solo, and Emperor Zapfingers in action, and for that alone it's well worth a look.

The appearances of the new Hero characters are too brief to reveal much about how they'll play, but that base was partially covered last week when they were officially unveiled. Leia and the Emperor will be primarily support characters, although they'll each have unique offensive abilities as well, while Solo is all about offense—although probably not so much that standing toe-to-toe with Darth Vader is a good idea.