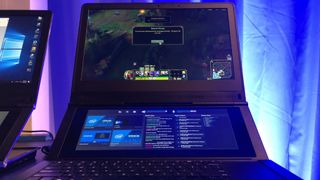 One key takeaway I've had from Computex 2019 so far is that dual-screen laptops are definitely a thing now. Whether they make their way into future iterations of the best gaming laptops is another question. For now, we have to keep an open mind and accept it as a possibility.

Though not exactly meant for gaming, Asus announced the ZenBook Pro Duo earlier this week. Before that, HP showed off a liquid metal-cooled dual-screen gaming laptop for the "affluent" gamer. Now it's Intel's turn. About a month ago, I visited the Blue Team headquarters in Santa Clara to check out its 9th gen mobile processors. It was there that I first saw Honeycomb Glacier, a proof-of-concept notebook designed to simulate gameplay across two monitors.

Propped up on a double hinge, Honeycomb Glacier boasts a unique value proposition over the competing dual-screen options, namely ergonomics. Unlike most laptops, which notoriously require stand attachments to use at eye level, the stand for Honeycomb Glacier is built-in. Simply raise the screen with your hands, and thanks to the implementation of a mechanical one-way roller clutch, it will remain steadily in place. Like magic, adjusting the display is as effortless as opening the lid on any other clamshell device.

Located below the main 15.6-inch, 1080p screen is a 12.3-inch, 1920x720 secondary display. When I spoke with Premium and Gaming Notebooks segment head honcho Frederick Hamberger back in April, I went from not understanding the appeal of the bottom screen to being completely enraptured by its mere existence. After I wrongfully assumed developers would have to add support for the second screen, he was quick to correct me.

"All content creation applications today, including Adobe, already have support for secondary displays," he said, gesturing to the bottom screen. "And the nice thing there is that, if I'm doing film editing, then I can get my film strip down here and I can get the full content on the top. On this one, I can go in and look at my entire strip of photos, and I can select which ones I want to edit. Maybe I want to change the brightness on four of them at the same time. I can look at all of them over here and have the main activity on top."

Useful as this is for creative types, Honeycomb Glacier is a gaming laptop prototype, not an explicit creator machine. Fortunately, that wasn't overlooked in its conception. Since 30 to 40 percent of PC gamers currently have a second monitor attached to their PC, according to Hamberger, Intel is capitalizing on a market that is already seeing widespread success.

"Most people look at a concept like this and go like, 'you're never going to get any ecosystem enablement for this.' And we go like, 'well, not for this uniquely.' But if you think about it, that system is already there."

Streamers, I'm told, are often frustrated by the fact that they have to use more than one monitor—or in some cases multiple systems—to manage their streams and their chats while actually playing games online for an audience. In an attempt to mitigate this common pain point, Honeycomb Glacier takes an existing function of the Windows 10 environment and mobilizes it. Extended display is nothing new. However, the way it's being showcased here is.

By consolidating a multi-display setup into a single, relatively compact device, what Intel is inciting is nothing short of a revolution for gaming laptop design.

In terms of specs, the Honeycomb Glacier configuration I got my hands on at Computex has a lofty thermal design power (TDP) of 175 watts, not that it needs it. On the inside was a dated Nvidia GeForce GTX 1070, an unspecified 8-core processor and a 32GB of RAM, all of which are overclockable.

Amid its beefy top bezel was a webcam capable of Tobii eye tracking, and on at the center of the top hinge was a second Tobii camera. In truth, this was the only worthwhile implementation of the technology I've ever seen, since I was able to use the companion software to toggle between applications. If I wanted to switch from streaming to chatting up my viewers, I could do so with a passing glance.

Another possible benefit of Tobii is battery life conservation. When I'm looking at the top screen, the bottom screen turns off, and vice versa. Because displays are one of the biggest threats to battery life longevity, this could help compensate for the high TDP and universal overclocking capabilities.

While it isn't not clear yet when we'll see the first round of Honeycomb Glacier laptops, Intel has admitted on record that the Asus ZenBook Pro Duo was inspired by its prototypical design. The company has also drawn comparisons to the mainstream adoption of the Ultrabook form factor, which made its debut back in 2011 following the overwhelming commercial sales of the similarly thin and light MacBook Air.

Until Honeycomb Glacier is itself a household name, we can look forward to the arrival of Project Athena later this year.