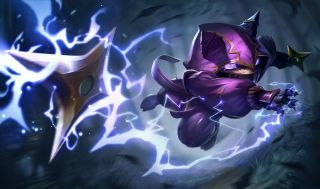 Whether you want to enjoy Teamfight Tactics yourself or just to watch your favorite streamer play, you've got to know what's happening on that busy screen first. It can be a bit daunting for newcomers, but you don't have to be a LoL expert to pick up TFT. If you're a newcomer, this guide will walk you through all of the basics of playing and explain some systems that aren't immediately obvious.

How to get Teamfight Tactics

You can’t play it until you’ve got it installed. Fortunately, Teamfight Tactics has been integrated into the main League of Legends client, which you can grab here if you don’t already have it. Once you have it installed and have registered an account, the play button will let you select Teamfight Tactics as the game mode.

So what is Teamfight Tactics, anyway?

Teamfight Tactics is just one of three big 'autobattler' games that have exploded in popularity this summer. And though it is the largest, it might be worth considering what the other two bring to the table to see which one you'd rather play, so check out our guide breaking down each of the three.

In Teamfight Tactics, you’re facing off against seven other players, each of whom is building an ever-changing team of champions across multiple rounds. The 'autobattler' genre gets its name because you don't directly control these units. Instead, they fight automatically and it's up to you to build an effective team and position them well.

If you win a round against another player, you’ll do damage to their health. The amount of damage you do depends on how many of your champions are still alive and scales exponentially upward as the game goes on. As your strategy evolves, you’ll need to adapt to your opponents and whittle them down to eventually be the last player standing in the free-for-all.

To do this successfully, you’ll try to purchase the best champions you can using gold you get at the end of each round. Buying copies of the same champion upgrades them, making them more powerful, and you can equip them with a variety of items that enhance their stats. Since the strategy is key, you’ll want to pay attention to your gold income, synergies between characters, and how to make the items you want.

Below: Esports organization TSM has a great video intro to TFT that's also worth watching.

How is the game structured?

Teamfight Tactics is divided up into rounds, most of which will see you squaring off against other players' teams of misfit champions. The rest are split between fighting NPC enemies for a chance to get an item, and rounds where you’ll draft new champions from a rotating carousel.

Before each round begins, you’ll have a short period of time to do any purchasing and reorganizing that you want to. This is your chance to trade champions between the board and your bench area, since once the fight begins you won’t be able to.

Each round will also bring in automatic gold and XP. Gold is used for purchasing champions, purchasing bonus XP, and to reroll the random selection of champions you can buy each round. XP will increase your level, letting you field more champions per round and giving you access to rarer, stronger champions.

Your first steps onto the Teamfight Tactics board will show you the initial carousel of champions, and allow you to pick one by moving your character over top of them. Afterwards, you’re dumped back to your own board, putting you face-to-face with what you’ll see for most of the rest of the game. Here's what each area is for.

What are synergies and items all about?

Synergies are a critical part of your strategy. Every champion has a couple of labels that denote which synergies they’re part of. These synergies activate when you’re fielding enough of the champions of that label to hit one of the thresholds, which you can see on the left edge of the screen. Once they’re activated, synergies give some kind of buff to some or all of your fielded champions.

Having two Glacial champions, for example, gives them both a 20 percent chance to stun enemies for two seconds when attacking, while with two Imperials, one of them will randomly get a double damage buff each round. Having more champions of a specific type can also increase the power of a synergy. Having four Glacial characters, for example, increases that chance to stun to 30 percent.

Some labels even have innate abilities—like Sorcerers, who gain double mana from attacks—which are always active regardless of how many you’re fielding.

Items can be equipped to champions to increase their stats and give them new abilities that are often extremely powerful. During rounds when you fight NPC creatures, each one has a chance to drop a random base item. To get the item, you can right-click your avatar over to its location to collect it.

The base items each provide a small bonus when you equip them to a champion, and when you put a second base item onto a champion, they’ll combine to form a new item with both the base bonuses and a powerful new effect. It’s important to learn what items do and what their combinations are so you can formulate strategies for which champions will benefit the most from their use.