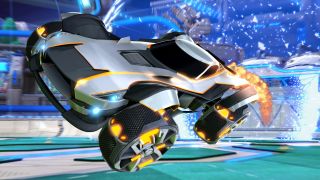 If you enjoy playing the key market in Rocket League, your days as a used car dealer may be coming to a close. As previously announced, Psyonix and its new owner Epic Games will be ending the key and crate system that has been the primary loot distribution method for some time. Today, they've announced what will replace it come December.

Rather than occasionally receiving loot crates which can be opened by purchasing keys, we'll occasionally be rewarded with 'blueprints.' Blueprints can be crafted with credits, the new premium currency replacing keys, and you'll know exactly which item each blueprint will create.

Unopened crates in your inventory at the time of the change will be converted to blueprints. Those blueprints will be for randomly selected items from the crates, so it might be wise to hoard them for now—one of them could turn into a blueprint for an item you've been hoping for. Unused keys in your inventory will become credits.

Also coming in December is a new Item Shop, where credits can be spent directly on a rotating selection of cars and car accessories, including "new items, legacy Crate content you might have missed out on, and the long-awaited debuts of items like the Titanium White Dominus."

Currently, it's possible to trade keys, which are worth about a dollar each. Big spenders can thus purchase a large quantity of keys and then trade them for crates or specific items they want, while the recipients can use their key hauls to open more crates or make a trade of their own. If the new credits can't be traded, some other item will have to be used as the 'currency,' and the marketplace won't be the same.

While some applauded Psyonix's decision to remove 'blind box' rewards from Rocket League, others felt burned. Under the current model, it is possible to obtain coveted items without spending money: Essentially, those willing to buy keys generate a marketplace for those willing to hoard random drops and make trades but unwilling to pay. Someone has to purchase the keys in circulation, but it doesn't have to be the person who ultimately uses them. If the new currency isn't tradeable, that all changes.

Personally, I'd rather buy credits and craft the specific item I want instead of buying keys, opening crates, and getting nothing I want—usually at 2 am, when I really shouldn't be spending money on anything. That said, I'm already one of the people who buys keys (against my better judgement), rather than one of the people who benefits from key purchasers.

Psyonix will announce more about the end of crates in the coming months. Prior to the switchover, it's releasing one last crate, the Vindicator Crate, this week on October 3 (the car at the top of this post is one of the items it'll contain). It's up to you whether to throw keys at it, or wait for it and all your other crates to turn into blueprints.

Rocket Passes will continue as per usual, the only difference being that the premium passes will cost credits instead of keys after the change. The Esports Shop, which uses its own special currency, will also go on unchanged.

You can find a few more details, such as what's happening with the current 'trade in' system (which is distinct from player trading), in the announcement post. Pricing on credits and blueprints is yet to be announced, and will partially determine whether the reaction from Rocket League players is overall positive or negative.