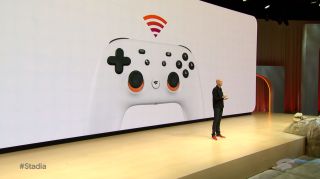 Earlier this week, Google announced that two new games would be added to Stadia Pro's free games lineup on February 1, Gylt and Metro Exodus, and that two others—Rise of the Tomb Raider: 20 Year Celebration and Samurai Showdown—will be removed on January 31. It was a fairly minor update, as both Gylt and Metro Exodus had been previously announced for the platform, although without a date, and seemed like especially thin gruel in light of a very large thread on Reddit complaining that it had been 40 days since the last "new game announcement/release, feature update, or real community update."

It didn't seem like a big step forward for a platform struggling to find its footing, nor did the response on Reddit from community manager GraceFromGoogle, who said they "understand where your frustrations are coming from" but had no further information to share.

Speaking to GamesIndustry, a Google rep disputed the Reddit complaint, saying that the Stadia team has been providing weekly updates on the Stadia Community forum. But, similar to GraceFromGoogle's response, there was little else of substance in the statement.

"We understand the desire to hear more specifics on the games. After all, that is what it is about: the games. Of course, not all 120 titles will be announced by the Stadia team, as we leave it up to the publishers to make the announcement about their IP/games, and which platforms it will appear on—just as we will do with the exclusive content coming to Stadia," the rep said.

"There are a lot of reasons for the time of those game announcements—anything from planned promotions or events, title readiness, proximity to first playable demo, shareholder requirements, etc. We continue to work closely with our publishing and developing partners and are here to support them in all areas. We are excited to share more about some of the exclusive games coming to Stadia soon."

The 120 new games the Google rep referred to were announced earlier this month, but no titles or release targets were set: Google said only that "we are tracking more than 120 games coming to Stadia in 2020, and are targeting more than ten games in the first half of this year alone that will be only available on Stadia when they launch."

We said when Stadia launched that it wasn't ready for prime time, and it's fair to say that remains the case. Stadia added achievements in late December, but more essential features like 4K streaming on PC are still unsupported and currently do not even have a solid launch date. Some Stadia owners are now calling for the three-month Pro subscription included with purchases of Stadia Premiere to be extended to six months, to compensate for the lack of features and communication so far.

Update: The post originally quoted GraceFromGoogle as staying that Stadia is "targeting more than ten games in the first half of this year alone." It has been edited to reflect the full quote.