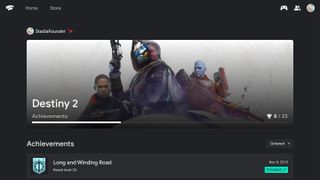 We noted when Stadia went live in November that there was a long list of features the service wouldn't support at launch, including some fairly basic stuff like achievements. Some of those, such 4K streaming to PC, won't show up until sometime next year, but Stadia announced today that achievements are live now.

🔔 Our achievement system is here and you will now receive notifications when playing on desktop, laptop, and TV. You can view your full achievement list on web, including all the ones you've earned since you began playing Stadia. pic.twitter.com/VX7cGg9K9kDecember 20, 2019

It's not the most robust achievement system ever: Achievements can't currently be seen in the mobile app for some reason (although that's "coming down the road"), and there's no way to switch off the achievement notifications that pop up when you make one, so if you're trying to create a video or simply find that the interruption pulls you out of the game, too bad.

There's also no equivalent to Gamerscore or Trophy levels, which assigns point values to achievements based on their difficulty and levels for racking them up, although Stadia said in response to an inquiry about them that it is "always looking for ways to improve."

The good news is that even though achievements only went live today, Stadia has been tracking everything you've been doing since launch day, so any progress you've already made toward them, and those you've already completed, will be applied automatically. Full details on the current implementation of achievements on Stadia is up at google.com.