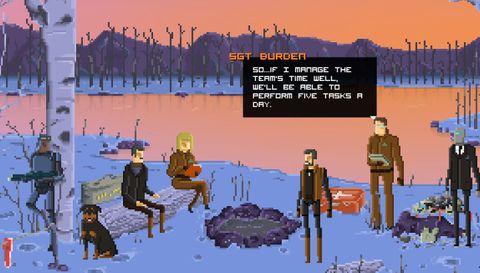 An inspired take on survival, where you get to bring your own horror.

Gods Will Be Watching is a game about the fact that you're probably not a psychopath, but that hey, sometimes shit happens. First scenario. You're not terrorists, or at least that's what you say. Your hostages may disagree, but as you tell them, you're not looking to hurt anyone here. They're just there for protection while your team hacks a government server.

Then the timer starts. All you have to do is keep things quiet for your hackers, and the guards outside the door out of flashbang distance—an instant game over. And everything would be fine, if everyone would just sit there and be quiet for a few minutes like good little boys and girls. But will they? No! The shitting little jellies just quiver in fear. Don't they know that they're safe? Shouting at them doesn't calm them down, but—Oh, damn it! The computer feed's been hacked again. Have the hacker fix that, then—what *now?* All the pussy-footing around made the hostages lose respect for your authority to the point of openly rebelling? Well, there's an easy way to fix THAT. Better hope their boss learns to love hopping.

Needless to say, this is a very unpleasant, very uncomfortable game to play—one that demands cold decisions in nightmare situations and then depicts the results with the heartless edge of a rusty scalpel. In a particularly beautiful little twist of that knife, the game itself stands back from moralising, encouraging you to do it to yourself at the end of each stage, with a The Walking Dead/Catherine style breakdown of how everyone else who played did—an objective, unarguable reminder that you could almost certainly have done better, and that you did in fact have a choice other than kicking the nearest dog over the moon.

And so, slowly but surely, in a hundred tiny little steps down that road to Hell paved with good intentions, does Gods Will Be Watching make you the bad guy. Or the mad scientist. Or the pragmatic military leader, slowed by a wounded soldier. The second episode sees an immediate shift from being more or less the one in control to the unarguable victim, controlling two soldiers being tortured for information over twenty agonising days. In each case, the rules and stakes shift. Confessing to everything will make the pain stop, yes, but since your life is tied to your psychopathic interrogator not knowing your secrets, it has to be balanced with lying, provoking, remembering prior confessions that won't actually give him anything new to play with, and nastier business like teeth being ripped out and making your partner suffer in your place, all in the name of staying alive until rescue comes.

For the most part, it's extremely effective, looking great and squeezing every drop of life out of its pixels, as well as backing everything with a great atmospheric soundtrack. Where it does struggle though is that to stretch out the handful of stories on offer into a commercial game, each vignette is designed to be challenging, even if you do opt to take the easier, often morally repugnant shortcuts like thumping hostages or using the team dog for medical experiments rather than risking one of the more flexible humans. The resulting repetition after things go wrong badly saps the emotional core of each story, with the characters soon becoming simple puzzle pieces and the horrible things you make them do simply mechanics, like decoding an antidote by injecting it into them and seeing which components flash up as being right and in the right place. (Bring a notepad!) The original Flash game, originally made for Ludum Dare, was a game that could be won, but winning felt less the point—it was how you approached the challenge and how far your morality in the face of adversity lasted that provided the hook. Here, completion rather than the raw experience itself is overtly what matters.

As puzzles though, they're interesting to solve. Occasionally the adherence to arbitrary scenario rules can be frustrating, with each vignette having its own rules—making that antidote for instance has a team working on concurrent tasks, while their survival afterwards only permits five actions and will leave them eating miserably raw food around a burning campfire purely because it wasn't previously cooked during the day. Moments like that are head-banging madness, though in fairness Gods makes no pretence of being a simulation rather than a resource management game where the resources include people, sanity and hunger. The scenarios are also long and can't be saved, which can be a real pain if you screw up on something minor, like letting a campfire run out or stumbling into an enemy base on the fifth, somewhat tedious vignette about leading a squad around a harsh desert planet.

That desert aside though, and even it has its moments, Gods Will Be Watching is a very clever idea well executed; one that opts to avoid the branching and overt morality of most similar games in favour of simply asking you to judge yourself as you see fit. The original Flash game offers an excellent taster of how it plays out, with this version upping the production quality and raising the stakes dramatically—a very clever, very different kind of adventure that will make you feel and make you feel bad, but for—hopefully—most of the right reasons.

Gods Will Be Watching

An inspired take on survival, where you get to bring your own horror.