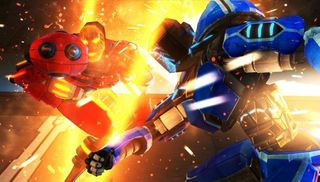 Sport, up to now, has been dangerously lacking in bi-pedal robots. This seems like a big failure, given that bi-pedal robots aren't going to demand massive salaries, drunkenly assault clubgoers, or spend the majority of their time filming adverts for razorblades. As role models go, they're pretty much perfect. In this sense Frozen Endzone is depicting a utopia: one where automated athletes do battle, all without ever feeling the need to spit on the pitch.

Pre-orders for the turn-based strategy go live this Thursday, 5th December, and grant instant access to the game's beta.