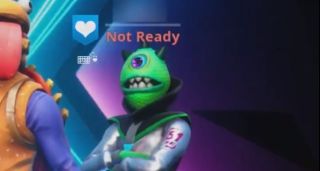 A Fortnite dataminer has uncovered a pair of new skins heading to the battle royale, including one that's almost certainly been designed to celebrate the brave storming of Area 51 that's taking place in a few days.

The Traveler skin is an cyclopean alien sporting a dapper Area 51 suit and was uncovered by s1l0x, who has posted some clips of the extra terrestrial visitor on Twitter. Watch him show off some moves below.

'Storm Area 51, They Can't Stop All of Us' is a joke Facebook event that's taken a life of its own. It's planned for September 20 and has attracted millions of people sick and tired of this alien cover up. Inevitably, a handful of those millions will lurk around the peripheries of the site, take some selfies and leave, but maybe they'll be lucky and spot some Ferengi.

The second skin is a female version of the Valentine's Day Love Ranger, who comes with some new back bling.

Epic has yet to officially reveal the skins, so we don't have exact dates for them, though the Traveler will likely make an appearance around September 20. We're also expecting Fortnite Season 11 to kick off early next month, and as per usual there are plenty of rumours and hints about what's in store for players, including another rocket event.