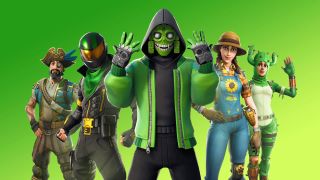 Epic announced a couple of weeks ago that changes were being made to Fortnite's matchmaking system. Beginning in the 10.40 patch, the change was aimed at matching up players of similar skills, regardless of platform, and meant that players "will be more likely to match with players of similar skill." Some people, such as in this Reddit thread, expressed fears that the changes could actually result in more unfair matchups, though, especially since Epic didn't say anything about how the system would actually work.

Epic acknowledged those concerns in a recent update, saying that the new system "accounts for various skill levels across different platforms and control inputs, and groups players of similar skill levels together," and that no platforms or controller setups will have an unfair advantage.

"Our goal with the new matchmaking system is to create fairer matches for all of our players, which includes special considerations for each platform. This means that where similar skill exists, players may be paired against opponents from ALL platforms—whether they’re using mouse + keyboard, a controller, or touch input," Epic said. "We are closely monitoring match analytics and your feedback, and we'll make adjustments to ensure everyone is playing a fair match."

"On the topic of smurfing, we’ve seen discussion around players smurfing as a way to have easier matches. Smurfing is a bannable offense. We see a bunch of negative behavior that occurs with smurfing and issues with gameplay integrity. If we see consistent reports and perceive that you are negatively impacting other players’ experiences, we will take appropriate action."

The update also touched on the new Combine game mode, changes to controller sensitivity settings, and more information on bots, which were announced alongside the matchmaking update.

In case you hadn't heard, Fortnite Season 10 was recently extended by a week—it's now scheduled to end on October 13.