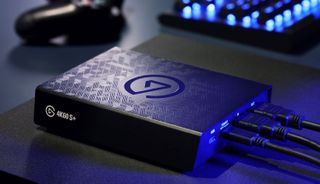 Elgato appears to have beaten AverMedia to market with an external capture device capable of recording 4K resolution gaming at 60 frames per second, along with HDR support. AverMedia teased just such a device ahead of CES, but Elgato has gone and launched one. Well, sort of.

Announced at CES, Elgato's new 4K60 S+ is available to order for $399.99 direct from Elgato or on Amazon, but it really amounts to a preorder. Amazon is quoting a ship time of 1-2 months, and Elgato's checkout page indicates it will go out in 3-4 weeks. In other words, Elgato has left the door ajar for AverMedia to step in and ship a similar capture solution first.

Either way, the 4K60 S+ is coming. Up to this point, recording 4K gameplay at 60 fps required an internal capture card, and of a course a PC to go along with it. There are external solutions capable of recording 4K gameplay, but as far as I'm aware, they all top out at 30 fps.

The 4K60 S+ is also unique in that it does not require a PC. Users can record 4K HDR content at 60 fps directly to an optional SD card. Elgato says onboard HEVC encoding keeps the file sizes manageable, while the pass-through offers zero lag.

While a PC is not required, it can still be used and offers certain advantages.

"When connected to a PC, 4K60 S+ records unlimited footage directly to a hard drive and takes advantage of versatile Elgato software features such as Flashback Recording to easily save gameplay retroactively and Live Commentary to record microphone audio as a separate track," Elgato says.

By "unlimited footage," Elgato is really saying it will continue recording so long as you still have storage space on your HDD or SSD. Still, there is the potential to record a lot more gameplay compared to a lower capacity SD card. Elgato also says the 4K60 S+ is compatible with popular broadcasting software, including OBS Studio.

When using a PC, Elgato says you will need a 6th generation Intel Core i5 or AMD Ryzen 7 processor, 8GB of RAM, GeForce GTX 10-series GPU or better, and a USB 3.0 port.