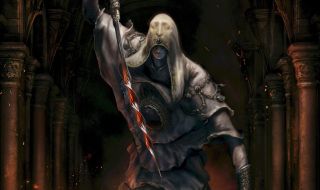 As expected, there weren't many "and it's out in just two months!" announcements at E3 2019. With new consoles on the horizon, the bigger multi-platform developers are preparing to ship the last of their current-gen games and teasing the games we won't see until sometime in 2020, a few of which are probably cross-gen. That means, of course, that we got lots of impressive cinematic trailers.

Vague game reveals leave a lot to the imagination, which can be dangerous as the real thing doesn't always live up to the expectations set by flashy pre-rendered trailers, or even 'gameplay' trailers that are too perfectly-staged to represent the experience. (Has that ever happened recently? Nah, couldn't have.)  That means there are some risks being taken by the games below, which we've dubbed E3's most mysterious.

We may not hear anything about some of them until June of next year, so for now, we can only wonder: What the hell is going on in these trailers?

Someone broke an old ring. The bastard. That ring commanded the stars!

That's the premise of FromSoftware's next game, Elden Ring, though it was expressed far more stylishly in the E3 announcement trailer above.

We do know some concrete things about Elden Ring thanks to a couple interviews with Hidetaka Miyazaki. It's an "open world style game" that you can traverse on horseback, it's FromSoftware's "biggest title yet in terms of sheer volume," George RR Martin wrote the "overarching mythos," and it's more like Dark Souls than Sekiro was.

That's basically what we expected from the rumors: a FromSoftware game, but bigger. I demand to know more about the big orc guy in the trailer. —Tyler Wilde

From Arkane Lyon, makers of Dishonored and Prey, it's a first-person shooter about two assassins stuck into some sort of deadly time loop (one could call it a deathloop, I suppose) on a lawless island called Black Reef. The intriguing part is that one assassin seems to be having a grand old time and wants to protect the repeating timecycle, while the other sees it as a prison and is hell bent on ending it.

How does this game actually work? I dunno. The trailer shows the two assassins killing each other a few times while doing battle with a bunch of other weird combatants using a variety of guns, melee attacks, and powers like teleportation and telekinesis.

The island looks weird and cool, surrounded by icy waters and home to a small city and several unusual structures, including a massive metal ring transmitting… something… that one supposes is the source of the time-repeating technology. What the hell is Deathloop, though? Some kind of battle royale made meta? Is it The Outer Wilds but with violence? Why does one character love the deathloop while the other hates it? And do we get to play as both of them?  —Chris Livingston

I think a GhostWire is when a ghost transfers ghost funds to your ghost bank account (Chase offers them), but I could be wrong. So what do we know for sure about the next big thing from Tango Gameworks? It's an "action-adventure" game, so it won't mimic The Evil Within's slower style of horror, but it is "spooky," as creative director Ikumi Nakamura spookily told us during Bethesda's E3 show.

Aside from that, all we have is the cinematic trailer above, and the rest of what Nakamura told us.

"People are vanishing in Tokyo, you must find out why," she said. "You will encounter conspiracies and the occult. You have to explore the world, face challenges to uncover the truth and save humanity. In the game, you will meet spirits, some are dangerous, some are peaceful, and survivors that each have their stories. You will need to ask yourself, is it normal, or paranormal?"

Also there's a cool guy with a bow, so we imagine we might be shooting arrows at things. Do arrows work on spirits?  —Tyler Wilde

We do know the basic premise of Outriders: it's a co-op shooter set on an alien planet full of scary aliens to shoot. Pretty cut and dry. What makes me curious is the E3 trailer, which doesn't look anything like People Can Fly's previous work, such as Bulletstorm. It looks like what the new Doom games might be if they took themselves more seriously: dramatic and fiery. —Tyler Wilde

The concept of 12 Minutes is not a mystery. Unlike some of these CG trailers, we know what it's about and what it actually looks like. It's a time loop game, set in a single apartment, and "what should be a romantic evening with your wife turns into a nightmare when a police detective breaks into your home, accuses your wife of murder and beats you to death." What's intriguing to me is the depth of possibility built into this concept, and how every small decision you make or action you take will take you down a slightly different path.

Developer Luis Antonio has apparently been working on 12 Minutes since 2014, shrinking its focus from an entire town down to this small apartment. The trailer perfectly sets up the concept without giving away how many variables there will be to play with, and I have a feeling 12 Minutes is going to be the kind of game we're all talking about when it comes out, comparing our tiny discoveries with one another. What happens if I leave the fridge open the whole time? Maybe nothing, but I'm going to find out. — Wes Fenlon

CrossFire is a very popular Korean game that's akin to Counter-Strike, but the trailer Microsoft played for CrossFire X, which'll be the first version to come west, didn't really scream Counter-Strike. On top of the expected multiplayer, we know that Remedy has been working on a singleplayer campaign for this version. And we have no idea what to expect. Nice trailer, though.  —Tyler Wilde

Among all of these, Halo is the game we got the best look at, but we're still full of questions. Why is it called Halo Infinite? Is it fundamentally different from the other Halo games in any way? Is the creepy hologram in the trailer really going to be how we remember loved ones in the future? Because it seems awful. A photo will do.

Here's everything we know about Halo Infinite so far, which isn't much considering it's Microsoft's flagship series.  —Tyler Wilde