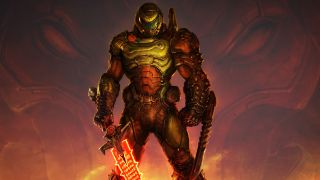 The last Doom didn't come easily. Development began as early as 2008, was scrapped and restarted in 2013, and finally made it to our PCs in 2016. Though the sequel's taken another four years, creative director Hugo Martin says the relentless pace of Doom Eternal's opening hours, and how absolutely packed with stuff it is, is the sign of id Software firing on all cylinders.

"What you're seeing is the product of a group of people working together really well, where we're able to discuss a feature, argue if necessary, move on to a resolution, and get it into a game and move onto the next one. We're so good at that we were able to do way more at a higher quality in less time," he says. "Within the first year of development we had the fun nailed down, we had the game nailed down. The rest of the time was just spent balancing out the pace of the game."

It's worth noting that even with ample development time and a team that works well together, Doom Eternal's developers had to crunch for much of 2019 to finish the game (which was then delayed to this March). Eternal is polished in all the ways you'd expect a big budget shooter to be, from its animations to its sound effects to its menus. But when Martin talks to me about polish, he focuses on "player education," the "tremendous" amount of time the dev team spent tweaking how and when you'll be introduced to new weapons and abilities.

"You'll notice they start to stack on top of each other," he says. "What was difficult in the first hour becomes second nature in the second hour. By the fourth hour, that's just one of many things that you know how to do. And really, by the eight hour, you are going to be a black belt. Just finding the pacing and nailing that, figuring that out early enough in development to be able to polish it was critical to making the game feel like it was exciting, exhilarating, but not frustrating. It's okay to be frustrated so long as I know what I did wrong and don't feel like the game is screwing me. That's very important."

Much of Doom Eternal's combat design, as Martin describes it, is built around punishing players for playing "wrong." At first that description bothered me. Sometimes the best (or at least the funniest) experiences in games come from playing them in ways developers never intended, which our writer Chris Livingston has shown time and time again. But for Martin, the goal is ensuring as many players as possible have the experience of using everything in Eternal's arsenal to survive, rather than cheesing the game with a single weapon, like Doom 2016's super shotgun.

Being unstoppable is fun for awhile, but it gets stale if a single strategy is the solution to every problem. This is why Doom Eternal gives players multiple guns, a grenade, a flamethrower, a dash, and even more tools in its first couple hours. This time around, it's hell bent on forcing you to juggle everything it gives you, with the view that juggling is the best way to have fun.

"How do we corral the player into playing that way? We're comfortable with punishing them if they don't," Martin says. "If I run up to somebody with a pistol and repeatedly shoot them in the chest, that demon has to kill me, and kill me fast. They will, in Doom Eternal. The demons are really aggressive if you're not doing what you need to do. That's what's keeping you engaged. If you're in the fun zone, doing the right thing, you're surrounded by a bunch of fail conditions. If I try to use the rocket launcher to solve every problem, I'm going to get myself killed, because this time around it's more powerful but it does way more self damage, and it shoots slower. Just that alone will get you to switch away from that super powerful weapon.

"The super shotgun was a very exploitable weapon in the last game. In the last game you could walk up to anybody, put the double barrel to their chest, and they die. This time... wait till you meet the Mancubus. Those days are over. Most [demons] have an area of denial attack that will knock a slow-moving player away really fast, and do a considerable amount of damage and displacement. That's like a frustration bumper.

"We think of the player like a pinball: They've hit that bumper and it pushes them right back into the fun zone, which is like, 'Hey, maybe you should use a different weapon for that particular enemy.' Or maybe you should create an opening. The grenade falters enemies, which creates an opening, meaning they can't do an area of denial attack. It's like a jab, and then you can go in and throw your overhand right, which is your super shotgun."

Martin jokes that "aggressive resource management" was the idea for Doom Eternal, as the team figured out how to follow up on Doom 2016. It doesn't exactly sound like a thrill ride, but when all those resources are guns, you apparently end up with Doom Eternal's bat outta hell combat. Its predecessor now looks almost glacial by comparison. Back in 2016 we jokingly wrote about how Doom could've been more metal, so I have to ask how Eternal ups the metal quotient, in his mind.

"Oh my god, in every way possible. Everything I'm saying is meant to make the game as engaging as possible. The critiques of Doom 2016 are that people became bored, they weren't engaged, and stopped playing. I wouldn't bother with weak points, the 'fun zone,' pushing players into these things if I didn't think it would engage them. Doom is definitely rock music, Doom 2016. This is speed metal. When you play the game you can feel it. You're thinking way faster, you're making split decisions. We want it to become rhythmic. You achieve a flow state of mayhem and violence. It's awesome."

And the soundtrack? Well, it's going to have a heavy metal choir, so the literal metal quotient is taken care of.

You can read more about what we liked and didn't like about Doom Eternal right here.