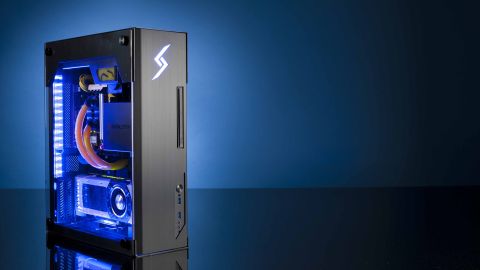 The bold and the beautiful

Mini-ITX machines are the hotness right now, and have been for a while. And why wouldn’t they be? We think that it’s super sexy to be able to stuff loads of power into a small form factor box. Digital Storm, no stranger to SFF builds, is trying to up the ante even further with its latest Mini-ITX offering: the Bolt 3.

Measuring 18.3x15.1x5.8 inches, the Bolt 3 also ups the ante in size with a new case designed by Lian Li. It’s roughly 25 percent larger than the Falcon Northwest Tiki we reviewed last month. While the box isn’t huge, and is smaller than mid-tower cases, it does feel a little too beefy to act as a console replacement next to your TV. Luckily, though, the Bolt 3 is a sexy beast, and it’s got a clear acrylic window to show off its innards. We think that if you’ve got a window, it had better be super clean on the inside. The Bolt 3’s interiors are damned near immaculate.

Inside, the Bolt 3 features a custom-loop cooler for the CPU, with a slick LED-backlit Digital Storm logo on the water block. Our configuration’s liquid came with yellow liquid and yellow ribbon cables. Truth be told, the yellow may not be for everyone, as there were mixed opinions about it in our Lab. Fortunately, the Bolt 3 has the option of red dye variants, too. The case sports LEDs along the bottom and back, which really make the inside pop; you can change the color of these lights and the LED logo on the front of the case to your heart’s content using Digital Storm’s pre-installed software. The software also allows you to change fan speeds and monitor temps.

In case you want to access the inside of the chassis, both the glass panel and the panel on the opposite can be removed via four thumb screws. Once you’re inside, you’ll notice a unique placement for the 600-watt SFX power supply. Normally, PSUs are tucked into the corners of a case, but here, it’s just about smack-dab in the middle, and has slick Digital Storm branding on its top side. Tucked behind it is the slim slot-loading Blu-ray player. At the top of the case is a 240mm radiator, and there are also two Corsair static pressure fans to go along with it. All of this is wrapped up in a chassis with a black brushed-aluminum finish. On the front of the case, you’ve got headphone and mic input, two USB 3.0 ports, and the power button. And in case you were wondering, the Bolt 3 can be used standing up or laid flat on its side.

While Digital Storm allows you to customize your rig, the company sent us a configuration with a 4790K CPU overclocked to 4.6GHz, 16GB of Corsair Dominator Platinum RAM clocked at 1,866MHz, and a GeForce GTX 980 Ti from EVGA that was overclocked by 200MHz across the board. All of this is sitting atop an Asus Maximus VII Impact mobo. For storage, we’ve got a 250GB Samsung 850 EVO SSD and a 1TB 7,200rpm hard drive from Seagate. For a little bit more future-proofing, we would have liked a 2TB HDD, considering our configuration costs over three grand.

Performance-wise, the Bolt 3’s overclocked Devil’s Canyon part was actually able to give our zero-point’s 5960X CPU a run for its money, besting it by 14–24 percent in our single-threaded benchmarks. Of course, the octo-core CPU gave the quad-core a proper 40 percent thrashing in our thread-heavy X264 benchmark. And in the GPU benchmarks, it’s not really a fair comparison comparing our ZP’s three 980s versus the Bolt’s single 980 Ti, where it got beat by roughly 30–40 percent. Just know that you will be able to play games at 4K with a single 980 Ti, but expect to have to turn down a few settings or run under 60fps.

You could certainly build something similar to the Bolt 3 yourself for several hundreds of dollars less (without Digital Storm’s service and warranty), and yes, it is bigger than we would like, but the system still has a lot going for it. It’s a beautifully put together rig, and it's got excellent cable management across the board. Digital Storm has got an eye for detail, and it shows. It also runs extremely quiet, which is a huge plus for a SFF machine. We wouldn’t bolt out and get one right away, but it’s definitely worth your consideration.