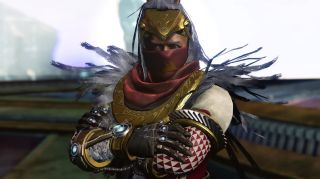 Yesterday, we reported that dataminers had dug up information on the next season of Destiny 2, purportedly called Season of the Worthy, which—if the dataminers are correct—will begin on March 9, and will see the return of the Trials of Osiris PvP mode. The process would begin with the launch of an Empyrean Foundation event, which would kick off with an activity called "Worthy" that would have players working to support the Restoration effort "and rekindle the Lighthouse to usher in a new age of Guardians."

And guess what's happening next week? As relayed in today's This Week at Bungie update, "the Empyrean Foundation rebuild effort begins."

"Saint-14 will ask all Guardians to contribute to building a beacon that will be a foundation for things to come next Season," Bungie said. "The Tower Obelisk will be the focal point of this event, so make sure you have it unlocked and ready to go as it’s going to have some hefty benefits to take advantage of."

Players must contribute Polarized Fractaline, a seasonal currency introduced in Season of Dawn, using the Tower Obelisk, progressing through seven stages, each requiring greater amounts of Fractaline. Tower Obelisks will generate Polarized Fractaline for you each week equivalent to its Resonance Power, whatever that means, and players who kick in more than 5000 Fractaline (our own Tim Clark already has 9k ready to go, because of course he does) before the end of this season will earn a Triumph and emblem.

All players will also receive a shader as each stage is completed, and everyone can take part—you don't need to have the season pass to play.

There's no direct mention of Trials of Osiris in the update, but it's effectively an exact match for what was found by dataminers, and the reference to "building a beacon" is pretty on-the-money too—the Lighthouse was a special location on Mercury in Destiny 1 that could only be accessed by Trials winners. Coupled with some heavy hints about Trials coming dropped late last year in the return of Saint-14, and it looks like a very good bet that it's going to happen After you've put a little work into it, that is.