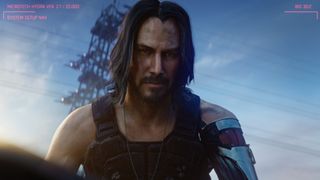 The Witcher 3: Wild Hunt had adjustable difficulty levels ranging from "Just the Story" to "Death March," which I think are sufficiently self-explanatory that I won't bother getting into the details. (The previous Witcher games had variable difficulties too, but their descriptions weren't quite so evocative.) So too will Cyberpunk 2077, which will actually have a "Hardcore" mode that disables the user interface completely.

"The most fun one I think will be the Hardcore setting where we turn off the UI ... And that will be a real challenge for a lot of players," Cyberpunk 2077 UI coordinator Alvin Liu told WCCFtech. "Also, at the same time, if you want to play more casually for the story and maybe you’re not experienced with shooters, which was a real big concern for us. We want to tell a story and maybe you’re a big fan of The Witcher and you’re not comfortable playing a shooter, we have settings available for that."

"We even have weapons for that. If you recall from last year’s demo, we had a weapon called the smart gun, which helps you aim. The bullets were much slower and usually a bit weaker. But if your aiming isn’t your forte, you can always pick up the smart gun."

Ideally there will be an option to disable the UI independent of difficulty: Playing without a visible interface can make for a much more immersive experience, but I have zero interest in getting owned by every two-bit chump with a heater while Johnny Mnemonic screams in my ear about how much I suck. I'm all for a challenge, but I'll take a hard pass on straight-up masochism, thanks.

Liu also put to rest the rumor that Lady Gaga would appear, Keanu-like, in a supporting cyber-role. "She’s pretty cyberpunk, so she could fit in!" he said. "But um, yeah, no Lady Gaga."