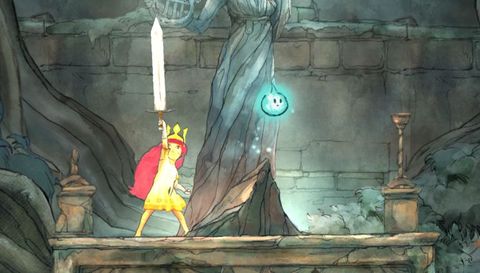 A beautiful game to look at, and wonderfully polished, but a thimble-deep RPG.

Aurora doesn't so much swing her sword at enemies as heave it into the air and drop it on them. It's bigger than her. But despite her size and this unwieldy weapon, the fate of Lemuria, a hand-painted fairytale world, rests on her tiny shoulders. It's an RPG in the Japanese mould, with elemental turn-based combat and party management. Even the battle music is pure Nobuo Uematsu.

The painterly art style is what catches your eye first. This is a vivid watercolour world that feels lavishly hand-crafted. It's like an animated storybook, with shimmering water and soft lighting bringing the 2D backgrounds to life. Aurora's red hair billows in the wind as she runs, and enemies lurch towards her with a fearsome gait. Artistically, it's hard to fault Child of Light. It looks like the pages of some ancient, dust-covered tome of fairytales discovered in a long forgotten library.

Exploration takes the form of a side-scroller. Early on, Aurora is granted a pair of wings which allow her to flutter freely around the large, detailed environments. Flying feels light and responsive, with thorny branches, gusts of wind, and traps to avoid as you navigate the world. There are no random battles; enemies are visible, and can avoided entirely or ambushed if you get behind them. But you'll want to fight as many as you can, because—again, harking back to Japanese RPGs—at one point I found myself at too low a level to defeat a boss, and had to spend some time grinding.

Thankfully, leveling is fairly rapid. This is a 12-hour game, not a grand, sweeping Final Fantasy epic. Each level grants you a point that you can invest in a skill tree, but the rewards could be more compelling. You won't be unlocking reams of new spells and abilities; just small bonuses to your magic points, critical hit chance, dodge chance, and so on. There's no sense that you're creating your own unique version of Aurora, which weakens the role-playing aspect of the game.

Aurora is accompanied by Igniculus, a firefly who floats around her activating switches, opening chests, and collecting wishes: glowing orbs that restore health and magic points. You can control him yourself, or another player can take over. Moving and interacting is simple enough that someone who doesn't normally play videogames, or even a young child, could comfortably join in. But I think most kids would get bored, as there really isn't that much to do. Aurora has all the fun.

Battles are simplistic, but do have a little depth. The strategy lies in knowing when to attack, when to defend, and when to hang back and heal. A bar shows you when an enemy is about to attack in relation to your next action, which lets you plan your moves. Igniculus can be used to blind an enemy and slow them down, giving you a few precious extra seconds to buff and heal your party or preemptively block. There's an enjoyable rhythm to the combat and it's surprisingly challenging in places—at least until a certain character joins your party, who makes the game notably easier.

The story is relayed through text, which is written entirely in rhyming couplets. It was cute to begin with, but quickly became grating. I was never really invested in the twee, saccharine story, and found Lemuria itself more captivating than anything happening there. The problem with this kind of lightweight fairytale fantasy is that it's painted in such broad strokes, it doesn't offer much scope for interesting characters—which any good RPG needs. Aurora meets plenty of oddballs on her journey, but they're little more than cardboard caricatures in a pop-up book.

I'm glad Ubisoft are making games like this, but the basic RPG and flimsy story at the heart of Child of Light don't live up to the promise of that enchanting artwork. It's elegant and polished, but not rich or customisable enough to be a really satisfying role-playing experience. There's fun to be had here, and it has a lot of heart, but I didn't love it as much as I thought I would.

A beautiful game to look at, and wonderfully polished, but a thimble-deep RPG.