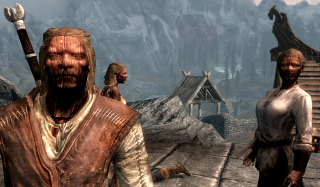 Skyrim is weird place filled with ice wraiths, giant spiders, werewolves, and skeletal dragons. It could always stand to get a little weirder, though, so why not start filling the world with walking, talking, humanoid creations made of wood? You can assemble these wooden people yourself with the Craftable Followers mod.

Start by subscribing to the mod in the Steam Workshop. Once you've loaded the game, find Anise's cabin, a small shack southwest of Riverwood. Head inside, pick the lock on the cellar's trapdoor, and look for a book on Anise's table. Grab it and read it, then head back outside, where you might find Anise in a foul mood. Like a lot of uptight Skyrim citizens, she doesn't like having her home broken into.

Visit a forge: this is where you'll be building your new wooden pals. In the crafting menu, scroll down to 'Misc' to find the list, and note the necessary ingredients. You'll need firewood, of course, and often things like leather, linen wrap, wheat, some plants, and possibly a few weapons or armor, depending on who you want to build. You can chop firewood at mills, gather wheat on farms, buy leather from blacksmiths, and find linen in general stores or by killing the undead. You'll also need some soul gems, which you probably have dozens of anyway.

Once you've got the goods, build someone. They'll appear in your inventory as a scroll, so select it, use it, and presto! You've got a new best friend. You can craft bards, merchants, farmers, mages, or warriors. You can build a trainer as well, and while they can't personally teach you anything they can at least sell you a selection of skill books.

If you plan to build more than one wooden ally, I'd suggest starting with a crafted lumberjack. He carries around 1,000 pieces of firewood, so if you build him first you won't have to do any more chopping. It's a little ghastly: from his perspective he's essentially carrying around a bunch of dismembered limbs, but he seems fine with it, so why should you object?

If you want to get even weirder, you can craft a wooden bride or groom and get married, though I'd be mindful of splinters on your wedding night. And, if the sight of your creaking creations walking around makes you wish your own body was made of wood instead of boring old flesh and blood, no worries. By starting a new character (or using the 'showracemenu' console command) you can actually play as a member of the Manakin race, as the mod calls them.

Talk to one of your creations, and you'll get the same options as when you talk to any of Skyrim's followers. You can invite them to come with you, dismiss them, or have them hang around a particular spot waiting for you. Keep this in mind while dragging them off to fight monsters: your new pal is made of wood, which comes with a natural weakness to fire. On the plus side, they're immune to poison and disease, and don't need to worry about breathing during extended underwater dives.

I spotted this mod on Kotaku. Thanks, Kotaku!