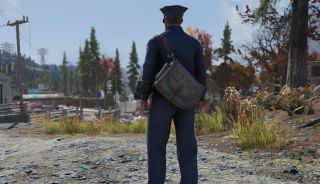 Fallout 76 has certainly had its problems, and 'bag-gate' is maybe the most notorious of them. But that story is slowly reaching a conclusion, as six months after the game arrived, Bethesda is finally shipping the notorious and controversial canvas bags to customers who are owed one.

As a quick recap of bag-gate, let me first close my eyes and rub the bridge of my nose before digging up a bunch of links. Okay. So, there was a $200 version of Fallout 76 that came with a power armor helmet, and that helmet was supposed to be inside a canvas bag. When the edition arrived to customers, they instead found the power armor helmet encased in a nylon bag. There were complaints, naturally, so:

But yesterday Bethesda announced the bags were finally on their way:

We are expecting to ship the Fallout 76 CE canvas bags starting next week. Once the final date is confirmed, our team will be following up on those submitted tickets. We appreciate everyone’s patience.June 6, 2019

Granted, a lot could still go wrong. What if the canvas bags still suck? What if the zippers on all of them are defective? What if people peel the Fallout 76 emblem off the bag and it says 'Brink' underneath? What if the bags are, due a manufacturing error, somehow filled with angry, stinging bees?

I guess we'll find out soon if the story is over, or if a new controversy is just beginning.