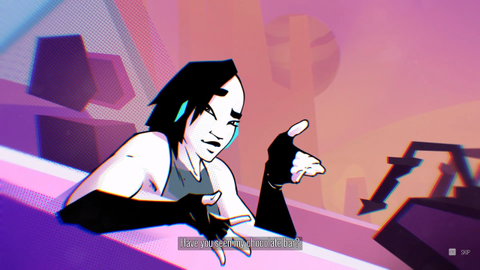 A sumptuous fusion of sound, colour and love that everyone should try.

What is it? A rhythm-action game inspired by the now-deceased Swedish DJ.
Expect to pay $20/£16
Developer Hello There Games
Publisher Wired Productions
Reviewed on RX 480, i5-6500, 16BG RAM, HDD
Multiplayer Local split-screen, up to 4 players
Link Official site

Avicii soundtracked my—on reflection, misspent—evenings in Portsmouth nightclubs through songs like Levels, Waiting for Love and Wake Me Up. I fuzzily recall grumbling that "you'll never find me listening to this at 3am on a weeknight when I'm older". Instead, the best part of ten years later, I'm doing exactly that. Except this time I'm toe-tapping away to Tim Bergling's inoffensive earworms in my flat. And slippers.

Avicii Invector isn't your average rhythm-action game. The project, that aimed to enhance Bergling's brand of electronic dance and house music by combining it with interactive and mesmeric environments, began in 2015, but the Swedish club sensation passed away in April 2018. Hello There Games and Bergling's team subsequently finished the game, with a percentage of the proceeds going to the Tim Bergling Foundation, which supports those with mental health problems. It imbues the final experience with profound poignancy beneath the upbeat sheen of the Swedish DJ's party anthems.

That final experience is 25 of Avicii's biggest hits grouped into five distinct, but ravishing, worlds. Similar to Amplitude or Thumper, you match notes to a corresponding button on your pad—I prefer this to the keyboard controls, but they work just fine too—on three different lane types that ensure that no song becomes a chore.

First, and most simple, is a flat road where your ship merrily hops from one note to the next, but you'll have to move laterally to hit them all. Next are the triangular pathways, where you flip the lane onto it's relevant side. Maneuvering the wrong way can throw you way off as notes fly past you, upside down. The third and final type isn't really a lane at all: it launches you away from the path altogether, giving you floating targets through which to zoom.

It's in these moments that the neon grandeur of your environments stand out; much of the UI disappears, letting you fully appreciate environments filled with towering skyscrapers and craggy cliffs, all pulsating and exploding with colour in time to the track that you're playing. It plays a little like Rez Infinite, as you're relieved of the shackles of traditional notes and lanes, and fits beautifully with a song's post-drop wind down.

In that sense, the song's clear structures transfer well to a music game. Make no mistake, I'm by no means an Avicii superfan, but experiencing them through Invector meant I grew to appreciate him and his music in a different way. The break or build section that precedes a drop is clearly forecasted, for example, which pushed me to save my boosts for a track's defining moment.

Boosts are rewards for skilled play and whizz you through a track at breakneck speed with an eruption of fireworks cascading around you. This, set against an entrancing, Tron-like world, combines to produce something frequently euphoric. Although there are rare occasions that the screen gets a little too busy to discern your next note.

Your charming pilot also emits an excitable 'Woo!' or 'Yeah!' on each boost. She appears between planets in a series of short, nicely-drawn vignettes, but the story is incidental, skippable and doesn't repeat after your first playthrough—which should take just a couple of hours.

Avicii detractors will get little from Invector, but those on the fence will struggle to remain unmoved as everything falls into place. That said, the distribution of the 25 songs that make up the game is a little off: the best-known are heavily concentrated in the City and Ice worlds. While that isn't necessarily a problem on your first go, when everything feels fresh, it's something that becomes more pronounced. After each song and planet is unlocked, it's available on all three difficulties. But when I tried to launch straight into the mid-game City world after polishing off easy, the jump to medium proved too much at first. Invector does a good job of preparing you for the next difficulty if you progress from beginning to end, but that may mean repeating your least favourites before you get to the really good stuff.

Despite that, Avicii Invector is an excellent, sometimes overwhelming experience. While it's impossible to know the state of the game when the DJ passed away, an infectious affection for Bergling's work now oozes from the rush of each break to every cathartic drop. But with each moment of elation comes an inescapable, gnawing emptiness as you remember the man himself will never see it.

A sumptuous fusion of sound, colour and love that everyone should try.