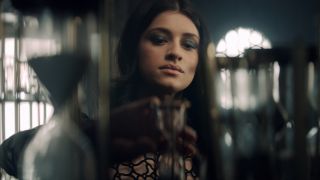 Ravens caw in a dusty, dimly lit attic. A man inserts a piece of flesh into a jar of strange liquid. Embalming fluid, perhaps? He places the jar on a shelf with many others containing other body parts, including an ear. He looks at himself in the mirror and smiles, dropping his cloak, admiring his body. Then a shadowy figure appears: it's Cahir, the Nilfgaardian soldier who has been hunting for Ciri. The man in the mirror is a doppler, a kind of shapeshifter who, in their natural form, are hideous, lumpen monsters. Cahir offers the man, who refers to himself as We, a job—to assassinate someone on behalf of Nilfgaard.

Mousesack, royal advisor to the Cintran royal family, is dumped out of a Nilfgaardian wagon. Cahir arrives with the doppler. "This one?" the shapeshifter says, disappointed. Mousesack makes a run for it, but the doppler chases him, pins him to the ground. His eyes whiten and his skin distorts, and suddenly he's the exact double of Mousesack. The doppler tells him that every experience he's ever had, every thought, is now in his head. The double stabs the real Mousesack, slowly, seeming to enjoy it. "You don't know what she is." the druid says, referring to Ciri. Cahir says she'll end up where she belongs as the doppler retrieves the piece of clothing Mousesack took from Calanthe's corpse.

In a room filled with hourglasses, Yennefer talks to a sorcerer, Hemet. He asks her about the life they've chosen, not being bound by the rules of the Brotherhood of Sorcerers. Yennefer doesn't seem to think it's that great. In the city of Rinde she talks to a couple. He's having trouble, eh, performing in bed. For a few coins, Yennefer casts a spell—a kind of magical Viagra—that solves his problem. I guess she has to pay the bills somehow. The meeting is interrupted by the mayor who demands payment from her for plying her trade—a magic tax. The other guy is pitching a pants tent all the while.

In Brokilon Forest, Ciri watches as the dryads talk about her in elder. "Shan-Kayan is the only reason we know she is." one of them says, perhaps referring to the mysterious voice Ciri heard at the end of the last episode. The dryad leader says Ciri can be moulded, can become one of them. Another disagrees. Before they can discuss it more a dryad arrives with the heads of two Nilfgaardian spies. It's only a matter of time before the Nilfgaardian army arrives, the leader says, worried, before announcing, in English, that Ciri is allowed to stay.

On the outskirts of Rinde, Geralt seems to be fishing in a lake with a net. Jaskier finds him, implying that it's the first time they've met for a long time. He mocks Geralt, who says he's not fishing; he's looking for a djinn—a genie, basically. The witcher insults Jaskier's singing, saying it's "like ordering a pie and finding it has no filling." The bard is insulted and exclaims, in the episode's funniest moment, "You need a nap!" Then Geralt drags something out of the water: an amphora bearing a wizard's seal. Jaskier grabs it and demands an apology for the pie barb. In the scuffle the jar is dropped and is smashed open, freeing the djinn. Then Jaskier starts choking, coughing up blood.

Geralt rushes him to a nearby camp where they meet Chireadan, an elf healer. Jaskier's throat swells up like a frog's and he coughs up more thick, black-red blood. The elf says he can only buy him a few hours with his medicine—this is a magical injury that requires a magical remedy. Geralt asks if there's a mage in the city and the elf looks troubled. The city's mayor has outlawed them, but apparently has one imprisoned in his house. The healer warns Geralt that this particular mage is dangerous and cunning, but the witcher doesn't seem concerned.

In Rinde, Yennefer and her old teacher, Tissaia, talk. She hasn't seen her for years—"not since you maneuvered your way onto Aedirn's court." Yennefer seems to have abandoned her post. The King she served, Virfuril, is dead—replaced by another. Tissaia reveals what Yennefer is searching for: a cure for her infertility.  She says it's a hopeless quest, that it's made her become "pure chaos." I'm reminded of episode two when she said her student's job was to manage chaos, not become it. Tissaia asks Yennefer to come back to Aretuza, but she declines and asks her to leave. Tissaia portals away, frustrated.

Jaskier sleeps, healing, his neck no longer all bulbous and disgusting. Yennefer says she can tell the exact breed and colour of Geralt's horse, because she can smell it on him. And so we're treated to our second helping of Tub Geralt. Yennefer gets into the bath and they have a battle of wits. Romance doesn't seem to be blooming yet, but it's clear they enjoy each other's company. Geralt notices that the spell she's using to heal Jaskier uses the same sign as the lid of the jar and deduces that she wants to find the djinn for herself. He doesn't know why, but we know she wants to use it to cure her infertility. With some effort, Yennefer clouds Geralt's mind and sends him to sleep.

Chireadan wakes Geralt up. They're in a jail cell. The elf mentions Geralt going on a "rampage", which he has no memory of. Apparently he kicked a pawnbroker in his delicate place and dragged an apothecary into the street and thrashed his arse with a belt—coincidentally (or not) the two people who were voting to have Yennefer banished from Rinde. The jailor beats Geralt. He says he's always wanted to "play" with a witcher. "I want you to burst, you son of a whore!" says Geralt. Then the jailor's head explodes. It seems Geralt is actually the djinn's master.

Back at the mayor's house, Yennefer wants to summon the djinn, making her own body its new vessel. Realising her plans, Geralt rushes to help her. Jaskier is incredulous: "Leave the very sexy but insane witch to her inevitable demise!" The djinn speaks through Yennefer, possessing her. It offers Geralt his last wish, promising him power, gold, or even not being a witcher anymore. He makes a wish, but we don't hear it. Even in the story this episode is based on, it's left up to your imagination. But whatever it is, the djinn leaves Yennefer's body, saving her. She's angry, at first, but then they have sex—the beginning a long-lasting, if occasionally tumultuous, relationship.

In Brokilon Forest, Mousesack arrives. Well, the doppler posing as him does anyway. Ciri is delighted to see him and he tells her that he knows where Geralt of Rivia is, and can take her to him. Ciri has no reason to suspect her old friend is a shapeshifter and agrees. She says goodbye to the dryads and departs the forest. The camera lingers on Mousesack's face, a grim, emotionless expression on his face. Whatever's in store for Ciri, it can't be good. And so ends another episode of The Witcher. Seeing the origins of Geralt and Yennefer's relationship was a real treat, and there were some great light-hearted scenes between the witcher and Jaskier. My only criticism is the very brief Ciri scenes—hopefully she has a more significant role to play in future episodes.

• This episode features a shape-shifting monster called a doppler, one of which you may remember battling in The Witcher 3. In the game, the creature takes Geralt's form and fights him.

• The death of the child in the previous episode seems to be weighing heavily on Yennefer's mind, and may be the reason she's so determined to reverse the infertility her enchantment caused.

• Chireadan the elf is secretly in love with Yennefer, which he makes obvious several times. He appears in the first Witcher game, although the amnesiac Geralt can't remember him.