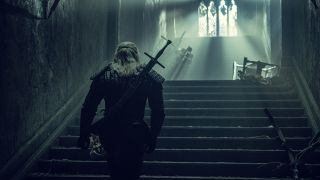 A boy lies on a bed, bloody claw marks across his chest. "It comes on a full moon," he says. "To feed." A witcher emerges from a dark corner of the room, a wolf medallion around his neck. Only this isn't Geralt—it's another witcher from the School of the Wolf. He says he'll slay the beast for 3,000 oren—up front. The men in the room agree and the boy's father screams with grief as his son succumbs to his wounds.

This is another great episode of The Witcher, with strong horror elements, some wonderfully gruesome monster design, and a palpable, rumbling tension throughout. I'm really enjoying the almost anthology-like feel of the series so far; how we're treated to new locations and new monsters every week. This episode shares the structure of the best Witcher 3 quests: a seemingly simple monster hunt that unravels into something much more complex, with Geralt getting tangled up in human drama he never bargained for.

The unnamed witcher follows a trail of blood. He finds a body, eaten, in a meat locker. It's quiet except for the sound of chains tinkling—surely an homage to Brett in the belly of the Nostromo in Alien. The witcher's eyes are black; he's been swigging potions, ready for a fight. Something stalks him from the shadows, impossibly fast. He readies his sword, but it's too late. The unseen beast tears the witcher to shreds.

Geralt wakes up in an inn, a courtesan beside him. She studies the many scars on his body, telling him about a beast folk are saying has been terrorising Temeria. The miners there are offering 3,000 oren for its head—a tempting offer for a penniless witcher. She adds that the previous witcher hired to do the job took the money and ran, but we know that's not true, having just witnessed his death.

The landlord bangs on the door, demanding payment for the room. Geralt tells the man he'll be back soon with his money, and warns him not to touch his horse. The witcher rides to Temeria, which is in the grip of winter, and locates the miners. They're wary of the witcher, but warm to him when Geralt says he'll take a third of the bounty—and after the monster has been slain. It's an offer they can't refuse.

The miners are planning a revolt. They think their king, Foltest, is hiding in his castle, refusing to deal with the monster—which they're convinced is a vukodlak, a kind of werewolf. But before the uprising gets anywhere, Temerian soldiers arrive. They order the miners to stand down and escort Geralt to the border. That is until a certain Triss Merigold shows up, sending the soldiers to sleep and freeing him.

Triss, who will be very familiar to fans of the Witcher games, asks Geralt to help her deal with the beast. But the spirited sorceress doesn't want to kill it—she wants to save it. Triss says the creature has been coming from the crypt of Foltest's sister, Adda. The witcher studies the victims, their bodies preserved in salt, and deduces that the beast isn't a vukodlak, but a striga—a woman transformed into a monster by a curse. And not just any woman, but Adda's daughter: a princess.

Geralt also finds the body of the other witcher, realising Foltest hid the truth of his demise because he didn't want people to know the creature is powerful enough to best a witcher. Angered, he takes his wolf medallion and pays the king a visit, finding him locked away in the castle, gorging disgustingly on a chicken leg. Foltest is angry that Triss has asked a "mutant mercenary" for help, but she insists Geralt is the right man for the job—especially as there's a full moon tonight.

It's graduation day in Aretuza. Yennefer stands in a ring of fire before a mirror, studying her hunched body. "Every girl I enchant leaves Aertuza a living work of art," a sorcerer says. "No matter how challenging the clay." Tissaia tells her to close her eyes and imagine the most powerful woman in the world. "Do you see her?" asks the sorceress. Yennefer says she does. "We remake ourselves on our own terms."

Later the Brotherhood of Sorcerers meet to discuss which kingdoms the new recruits will be sent to. Mages act as royal advisors in the world of The Witcher. Tissaia wants to send Yennefer to Aedirn, where she was born, but Stregobor reveals her elven lineage—information given to him by Istredd in the previous episode—which rules her out. "Efforts in Cintra prevent the Brotherhood from placing a mage with elven blood in Aedirn's court." Tissaia explains later to a wounded Yennefer—wounded because she won't be able to serve in her home kingdom, but also because she knows Istredd broke her confidence.

Back in Temeria, Geralt suspects Foltest impregnated his sister, Adda, leading to the creation of the striga. "She grew inside Adda, feeding on her petrified womb," says Geralt, trying to get a reaction out of the stubborn monarch. "Mutating. Growing for years, till she got so hungry she was forced to slither out. An overgrown abortion." Foltest angrily orders Geralt to leave his kingdom, but he seems rattled.

Triss finds Geralt, very much still in Temeria, near the abandoned castle containing Adda's crypt. He throws a stone and the jittery soldiers guarding it flee in terror. Inside Triss finds a secret compartment in a music box containing letters from Queen Sancia, Adda and Foltest's mother. The brother and sister were having an affair and she knew about it, which could suggest she was responsible for cursing the child, turning it into a striga. Geralt, however, has other ideas.

"This could destroy the throne," says Ostrit, a courtier loyal to Foltest, when Triss and Geralt show him the letters. Then Geralt reveals his hand; he smelled Ostrit's scent on Adda's bed in the abandoned castle. The courtier breaks, admitting that he loved Adda and cursed Foltest out of jealousy—a curse that was passed onto her, birthing the striga. "Countless are dead because of your jealousy!" barks Geralt, but Ostrit refuses to tell him how to lift the curse. He wants Foltest to suffer, he says. Geralt is not amused and punches him.

In Aretuza, Yennefer confronts Istredd in the Tower of Gulls. She knows he's been passing information about her to his rector, Stregobor. But Istredd hits back, revealing he knows about her giving the feainnewedd flower to Tissaia. Istredd tells her she's missed the initiation, that the enchantments are already done—but it's fine, they can stay here, travel the continent together. "That's not my destiny," says Yennefer. "It's a slow suicide." She leaves, furious.

As the other initiates dance, feast, and celebrate, Yennefer confronts the sorcerer from earlier, challenging him to make her beautiful. He warns her that she can't be awake during the procedure—it's too painful—but she demands he do it anyway. "There is a cost to all creation," the mage says. "A sacrifice that is always made." If Yennefer undergoes the procedure  she'll never be able to have children. She agrees, closes her eyes, and steels herself for the trauma to come.

It's night in Temeria, a full moon, and the lid of Adda's tomb scrapes open. Geralt has Ostrit tied to the bed he sniffed out earlier, who tries to recall the details of the curse. He insists the Queen Mother put him up to it. The creature guts Ostrit and Geralt springs to action, in a brutally one-sided fight that sees the witcher being tossed around like a handsome ragdoll. If he was trying to kill the thing he might fare better, but remember—Triss wants him to lift the curse.

The striga is brilliantly horrible, by the way; slimy, black, and twisted, dragging a tentacle-like umbilical cord behind it. And I like how we don't see many clear shots of it—again recalling the xenomorph in Alien, a film that seems to have been a big influence on this episode. Geralt tries to capture the creature in chains, but it breaks free. "Fuck." he says, in a rare outward display of emotion. But after a scrap he manages to knock the striga out by collapsing the floor with his Aard sign.

As the sun begins to rise, the striga tries desperately to climb back into Adda's tomb. But Geralt overpowers it and climbs in himself, dragging the lid back into place and sealing it with a magical sign. The next morning he emerges and finds Adda and Foltest's child lying in the crypt, bloody and covered in filth. She lunges for him, feral and animal-like, badly injuring the witcher. He bites her in defence and lies there, blood running down his mouth, eyes wide and scared. It's the first time we've seen Geralt like this. He's human after all. Kinda.

Back in Aretuza, the sorcerer works on Yennefer. He removes something from her womb—her uterus, maybe, but it's unclear—and creates some kind of paint with it. He paints black lines over her naked body, transforming it, as she screams in agony. Then, later, we see the results. Yennefer, her hunched back gone, walks into the graduation ball, beautiful and confident—and closer to the Yennefer we know from the Witcher games. The other students are stunned.

She approaches King Virfuril of Aedirn, basically shoving another student out of the way, announcing herself as Yennefer of Vengerberg. Tissaia tries to intervene, apologising, but the King is having none of it. He dances with the reborn Yennefer. Back in Temeria, Triss tends to Geralt's wounds. Apparently he's been saying Renfri's name over and over again in his sleep. We also hear echoes of her voice, about how the "girl in the woods"—Ciri—is his destiny. Geralt takes his coin and leaves Temeria, back to the inn where he left Roach.

And just before the episode ends we rejoin Ciri. She hears voices whispering her name, coming from a deep forest. Something compels her to follow them. Dara runs after her, trying to get her to stop, but receives an arrow in the shoulder from an unseen archer. The whispered voices continue chanting Ciri's name as she walks slowly into the darkness of the forest, lured by someone—or something. If Ciri really is Geralt's destiny, he better find her quickly.

• Yennefer using magic to conjure up a crowd of onlookers while she has sex with Istredd is, well, a bit weird—especially how she makes them give a round of applause when they finish.

• King Foltest will go on to play an important role in Geralt's life, particularly in the second Witcher game, Assassin of Kings. As the name suggests, things don't go particularly well for him.

• Yennefer's transformation scene is surprisingly gross. When I heard about her appearance being the result of an enchantment in the games, I imagined some ethereal magic spell, not... this.

• I loved seeing the beginnings of Geralt and Triss's playful relationship. The actor who plays her, Anna Shaffer, brings a real spark to the role, and I hope we see more of her in future episodes.