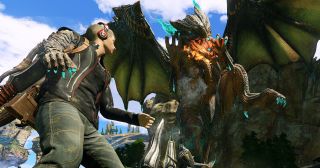 Microsoft showed Crackdown 3, Scalebound and Quantum Break at the Xbox conference this week. If Microsoft are planning to make Windows 10 part of the Xbox ecosystem, why not bring those games to PC? We put the question to head of Microsoft's Xbox division, Phil Spencer.

"In the case of things like Scalebound or Crackdown or Quantum Break, you know, just to be completely honest with you, we started those games before we really looked at expanding into Windows in the way that I wanted to bring as part of becoming head of Xbox.

"Going to those teams mid-cycle and saying: ‘Hey, by the way, I want to add a platform,’ didn’t really feel like necessarily the best way to end up with the best result for the game. They had a path that they were on. It’s not to say those games could never come to Windows, but right now we’re on the path to finish the great games that they’ve started, and I want that to be the case. These games are on a path, whereas with, like, Halo Wars 2 I had the opportunity from the beginning, when we’re sitting down with the studio, to say, ‘Here’s the target. Here’s what we wanna go do.’

It sounds like more Xbox games could appear on PC, but only if MS feels they suit the platform. Spencer also implied that we could see some series from Microsoft's past return "purely on PC".

"What I’d say is, my goal is to bring—to build—great PC games, and I think there’s some great PC games that can come from the things that we’ve done on console, but that’s not the only place that they would come from. And there might be some games in our console portfolio that don’t work on PC, and vice versa.

"I look at the franchises that we have on console and I think there are some franchises that can work really well on PC. I also think about some of the things in our past, as Microsoft, that we used to have on PC, and say, ‘Boy, wouldn’t it be great if we brought some of these games back purely on PC.’"

"So I’m stating it again, I’m kind of less in the broad sweep of, ‘Everything should be over here and over there,’ because I think in certain instances that might not be the right model, but I definitely want to build out our Windows games portfolio, and we’re making slow progress on that. But slow in a way that I think is good, because we’re being deliberate about the games that we’re deciding and make sure we have a real plan."

Fable Legends and Halo Wars 2 are part of that plan. Fable is set to take full advantage of DirectX 12, and The Creative Assembly are on board to make Halo Wars 2, which was announced earlier this week at Gamescom. What would you like to see Microsoft bring back from the past? Age of Empires, perhaps?